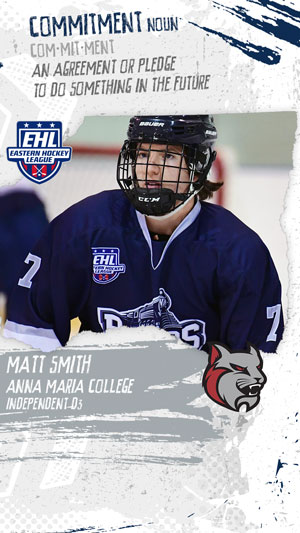 Although suffering a season-ending injury just before Christmas in his final year of junior hockey, Worcester Railers forward Matt Smith has committed to Anna Maria College for the 2020-2021 season.

“I‘d like to thank coach James Mello, coach Brian Addesa and especially coach/GM Mike Addesa for everything they’ve done for me and my career,” said Smith. “I have nothing but great things to say about the coaching staff and the administration, and the way they’ve shaped my game, on and off the ice. After sustaining multiple injuries and ending my season in December, I was unsure of what to do but Mike Addesa had my back every step of the way.”

“I have nothing but great things to say about the coaching staff and the administration, and the way they’ve shaped my game, on and off the ice.”

A native of Marshfield, MA, Smith remained a positive influence on his teammates despite not being able to contribute on the ice for the second half of the season.

“He faced overwhelming adversity with a season-ending leg injury in his final year of eligibility, an obstacle many would be unable to overcome,” stated coach Mello. “Throughout his recovery process, he remained close to his teammates and provided them with a great example of what it means to be a dedicated hockey player. The Railers organization is proud that Matthew will get to continue his hockey and academic career at Anna Maria where he will have the opportunity to compete in the NCAA ranks of college hockey.”

Matt was a big part of the Railers inaugural EHL season right from the beginning, something that was not lost on the coaching staff.

“We were fortunate to have a guy like Matt Smith on the team in our first year of operation.” Mello explained. “He is dedicated in every sense of the word when it comes to the game of hockey and carries that dedication into all facets of his life. Matt is someone who walks with his head high and shoulders back, he takes a lot of pride in the effort that he puts forth. He was committed to our program from Day 1, bought in to what our organization was teaching on a daily basis and worked to improve in all areas of life to become a better hockey player. This young man thinks the game well, is not afraid to get to the high traffic areas of the ice and manages to find the puck in scoring situations, and most of all, he is a great teammate.”

“He is dedicated in every sense of the word when it comes to the game of hockey and carries that dedication into all facets of his life.”

“I would like to thank my parents, my family, as well as all my teammates throughout the years for their continued support,” Smith said. “I am incredibly excited to attend Anna Maria College, and am looking forward to being an Amcat! And again, I thank the entire Railers organization for providing me with an opportunity to live my dream.” 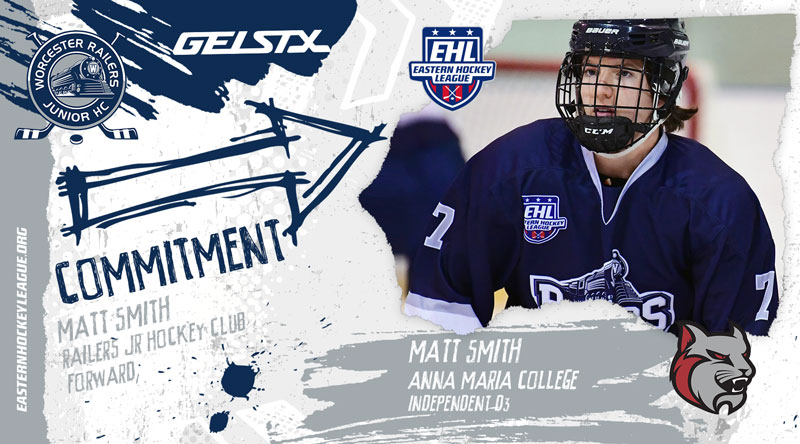