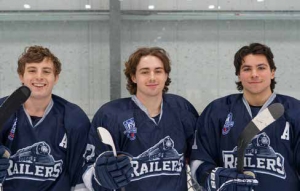 One of the hottest lines in the Eastern Hockey League wasn’t even a line until mid-December. That’s when Worcester Railers coach James Mello and associate coach Brian Addesa put center Tucker Twardosky, right wing Jonathan Courchesne and left wing George Vonakis together, and the trio has been on a tear since then.

Each member of the line was a standout Jan. 3-5 when the Railers hosted the Road to College International Hockey Showcase that pitted EHL teams against teams from the Quebec CEGEP League. With college hockey scouts from Division I and Division III schools looking on, Courchesne had four goals and two assists, Vonakis had two goals and two assists and Twardosky had one goal and three assists in three games.

All those numbers put up by the linemates are even more impressive against the backdrop of these facts: the Railers are an expansion team that was formed before this season on an aggressive timetable. And their defense is not their strong suit.

“Our defensemen have a difficult time getting clearing passes up to the forwards,” said Railers general manager Mike Addesa Sr. “So our big line doesn’t get a lot of opportunities to score.”

Mike Addesa refers to the big line a “hybrid” line because each player was asked to step out of his comfort and skill zones and take on new roles. “Our two young coaches (Mello and Brian Addesa) came up with the idea for the line, the three players sacrificed what they knew best to help their team, and now the line, which we’re calling the ‘Self-Sacrifice Line,’ is one of the top three lines in the league,” Mike Addesa said.

Helping their team is in the three players’ DNA. Courchesne is the Railers’ captain. Twardosky and Vonakis are the assistant captains. Twardosky leads the line’s forechecking efforts. Courchesne has lightning speed, according to Mike Addesa, and gets a lot of his goals on rushes to the net. Vonakis is the line’s facilitator, as all his assists would attest. He’s the quarterback when the line goes out on the power play.

“Our coaches came up with an imaginative power play for the line,” Mike Addesa said. Having a red-hot line hasn’t translated into a ton of victories for the Railers — they won four of 10 games at one stretch — but they’re certainly more competitive than they were earlier this season.

“We’re doing much better than people expected we’d do as an expansion team,” Mike Addesa said.
College recruiters have taken notice of the Railers’ high-scoring line, and not just because of the players’ hockey skills. This is the final season of junior hockey eligibility for all three players.

“These three guys are exceptional students, have excellent character and are hard workers,” Mike Addesa said. “They’re getting a lot of college offers.” The linemates are from three states. Twardosky is from New Hampshire, Courchesne is from Vermont and Vonakis is from Maryland.