The Worcester Railers first year with a team in the Eastern Hockey League’s Premier Division (EHLP) was nothing short of a huge success. The youngest team in the league, the Railers were amongst the loop’s top clubs all season long.

Already behind the eight-ball due to the lateness of getting franchise approval from both the EHL and USA Hockey, the Railers staff went to work right away putting together teams for play in both the EHL and EHLP for the 2019-2020 season. A focus for this new organization was its foundation program, the EHLP team.

“We had less than five months to puck drop to put together two teams,” said Railers JHC General Manager Mike Addesa. “We knew that the great majority of older players would be gone while we were putting together two competitive teams. We built from the bottom up.”

Armed with five 2003s and no less than six 2002s on its roster, Worcester got off to a fast start, winning four of its first five games en route to an impressive 33-10-1 record. Included were winning streaks of seven and eight games, and a two-game sweep of the Walpole Express in the first round of the playoffs. The Railers allowed a league-low 88 goals during the regular season, 17 less than the next lowest amount.

“It was incredibly satisfying to see this team win 33 in our inaugural season,” said head coach Mike Addesa III. “It can be very challenging to have an entire team of new players, especially a team with almost no junior hockey experience. There are no veterans that know the systems or are familiar with the other teams, or the refs. To see a brand new group come together like that made me incredibly proud.”

“These young men were committed, determined and digested everything we taught,” said Worcester assistant coach Sean Bertoni. “It was a pleasure to see the progress throughout the year and the credit goes to the players’ dedication to the program.”

“Our philosophy was to build the best foundation we could,” Addesa said. “The premier team is the foundation to the mansion we are trying to build, which is the Worcester Railers Junior Hockey Club.” 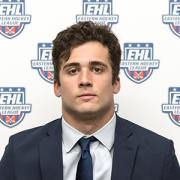 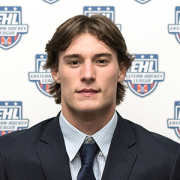 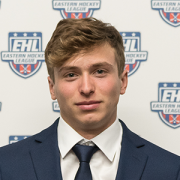 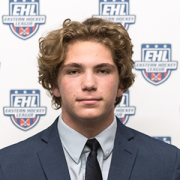 In past junior hockey endeavors, Addesa’s teams have had the unique feature of having younger players on the roster that would return to their high school teams. That was the case for this Railers team, which took four players from September – November. The four players – forwards Ryan O’Halloran and Brendan DeMarco, and defensemen Michael Martignetti and Shawn Spring – were all key members of the squad, and all were back with their high school teams for the first day of practice the Monday after Thanksgiving.

“I have a great belief in high school hockey,” Addesa said. “It is a wonderful opportunity for youngsters. You only go to high school once, to play with guys you grow with, walk the corridors with, eat lunch with.”

“Both have a real future in hockey,” Addesa said. “And both were noticed by several Division 1 coaches.

Martignetti was a key fixture on the blue line, and in the locker room.

“Michael was upbeat, positive, exceptionally charismatic,” Addesa said. “He had an impact on all the players on the team. And, his quality of play was highly reliable which is the key for all high-level defensemen.”

Shawn Spring was one of the five 2003s. Prior to returning to Lowell (MA) HS, his play showed consistent improvement, earning him quality time on both the power play and the penalty kill.

“Preston was a steady performer all year,” Addesa said. “He scored some clutch goals, from high-traffic areas in key times when we needed them the most. Cody, who was an All Star at the highly-regarded HNIB Boys Major Showcase last summer, was an offensive attacking defenseman who played a key role, despite missing three weeks with a shoulder injury.”

The other two 03s on the Railers roster – Spencer Clark and Matt Pacheco – both showed their team-first approach. Forwards, they both moved back to the blue line later on in the season to fill in as injuries hit the defensive unit hard, and did yeoman’s work.

“They were our unsung heroes,” Addesa said. “I believe the success of our team would have been nowhere near what it was without these two guys making sacrifices and moving to defense.” 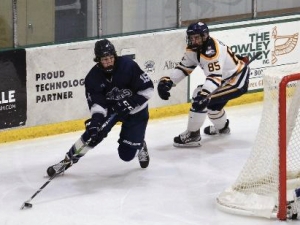 Successful teams need good leadership and the Railers got that from the team’s two captains – forwards Colin Roe and Joey Lizotte.

“Our coaches put in a real good system and we followed it,” said Colin Roe. “Plus, they gave us positive criticism. Also, more than half the guys on the team are from Massachusetts so we kind of knew each other. A couple of us had played together.”

Then, there was the obvious. “We knew we were facing teams with older, stronger players, so we spent a lot of time in the gym and our practices were high energy,” Roe says.

“We knew we were facing teams with older, stronger players, so we spent a lot of time in the gym and our practices were high energy”

“I think we did a great job recruiting a team of players with an aptitude for a very specific team culture.  We had great leadership by our Captains Colin Roe and Joe Lizotte, and the group of guys that we had really wanted to be together, to be a team, Addesa III said. “Another factor was that these kids really wanted to be developed as players.  They were willing to set aside some of the things that had made them successful players in the past at lower levels, and commit to doing things our team’s way.  They put their egos aside and were able to put the team first.” 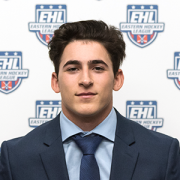 Roe, who led the team in scoring with a 26-21-47 line,  plays a hard-nosed game and got better every week. He was named a first team All EHLP New England Division performer.

The leadership of Colin and Joe on and off the ice was passed on to each player throughout the locker room,” Bertoni said. “They came to the rink each night with a smile on their face willing to learn.”

“They came to the rink each night with a smile on their face willing to learn.” 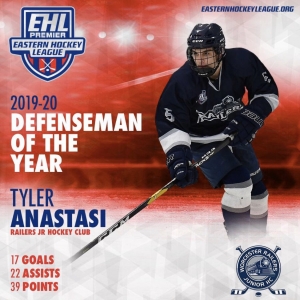 02 defenseman Tyler Anastasi, who Addesa called a great competitor and a very key part of the team, was named the EHLP Defenseman of the Year. Anastasi was a key component of the Railers offense as well, finishing up as the team’s second leading scorer (17-22-39).

One of the Railers best lines all season was the unit of Cameron Blanchard centering twin brother Ethan Blanchard on the right and Jayden Blackburn on the left. All are outstanding skaters.

“Every week Jayden got better and better,” Addesa said. “We called the Blanchards ‘Old Reliable’. They were great on the penalty kill, relentless, hard-working. Every goal they scored was a big goal.” 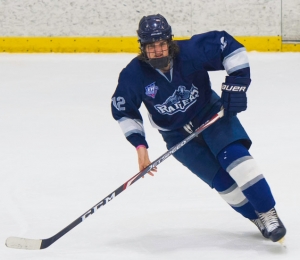 Charlie Addesa (9-17-26) was another guy who put the team’s success first. The team’s best face-off man, Addesa also moved back to the blue line when needed late in the season and did a terrific job.

One of two players who played in all 44 games, forward Vaughn Gillen put up a highly-respectable line of 15-14-29, playing both center and left wing.

“Vaughn is big and strong and scored a lot of timely goals,” GM Addesa said. “A lot of his goals came from high-traffic areas.”

Despite missing six weeks due to injury, Evan Vassilovski was able to put up 20 pts in 32 games. He also improved defensively during the year.

“Evan was clearly one of the most talented players on the team,” Addesa said. “He plays the center position with a lot of grace.”

And despite more injury and illness, the Railers were able to get great goaltending throughout the campaign, although the rotation at the end of the season was different than it was to start the year. 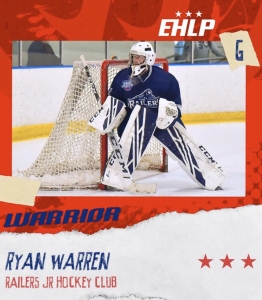 Ryan Warren – EHLP Goalie of the Week in November, 2019

Two of the first players the Railers signed were goaltenders Ryan Warren and Marshall McKallip. They quickly showed that they were two of the top netminders in the league. McKallip came down with a case of mono and was out for over three months. In late-November, Warren suffered a serious groin injury and was not able to return to the lineup.

So, the EHL team’s back-ups, Topias Maki and Curtis Briggs, came to fill in, and eventually became the team’s goalie tandem to finish the season. Maki had a brilliant 1.57 gaa and .944 save percentage, while Briggs furnished a 2.40 gaa and .916 save percentage as the two basically split time in the nets.

Three forwards who contributed in a big way to both the EHLP Railers and the EHL Railers team were 2000s Shawn MacTavish, Luca Filocamo, and Hayden Goldstein.

Addesa and the team’s coaching staff are already hard at work building next years’ roster and excited about how much success the Railers can have in 2020-2021 after seeing what this group accomplished in year one.

“I know we were young and maybe there is something to be said for younger guys being a little more malleable, Addesa III said. “What I do know is that by having this young group in our first year we are set up to build and grow and have developing and experienced players be part of our organization for a couple of years, continuing to learn the game before they all go on to play in college. It is an exciting time as we look to the future growth of our program.”