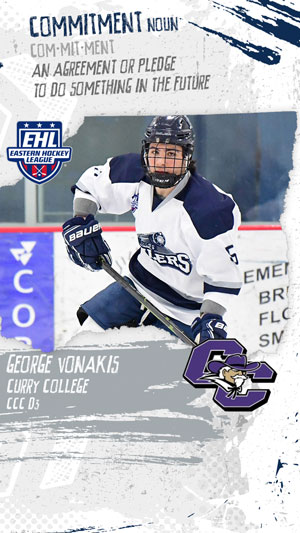 It’s Curry College next for Railers leading scorer George Vonakis. Vonakis, a native of Abingdon, MD, was one of the top forwards in the Eastern Hockey League this past year, compiling season overall totals of 11 goals and 31 assists for 42 points.

“We are extremely proud of George Vonakis and his commitment to play NCAA hockey at Curry College,” said Worcester Railers head coach James Mello. “He developed tremendously over the course of this season and was able to play a crucial role for us. George has an excellent skill set and great awareness on the ice.”

“He developed tremendously over the course of this season and was able to play a crucial role for us. George has an excellent skill set and great awareness on the ice.”

“I am proud to announce that I will be continuing my academic and athletic careers at Curry College,” said Vonakis. “Endless thanks go out to my mother and father, my brothers, Coach Mello, the Addesa family, and all my teammates throughout my junior career for their continued support. Finally, I would like to give special thanks to the Bergeron Family for allowing me to live in that beautiful house on Spring Lake and to Mrs. Bergeron for the wonderful home-cooked meals she provided for myself and my teammates.”

“I would like to thank Coach Manastersky for this incredible opportunity. I am extremely excited to become a Colonel!”

George also was extremely grateful for the guidance of coach Mike Addesa, the GM.

“(Coach A) helped me grow an incredible amount as a player, he knows so much about the game of hockey. He also stresses life skills to all of us and we often discuss what it means to be a good person and to grow into being a good man. I will always be indebted to him,” he said.

“In many ways, his ice awareness, his vision and his passing ability reminded me of the skills possessed by two of my former players – Joey Juneau and NHL Hall of Famer Adam Oates.”

Vonakis saw time with the Philadelphia Little Flyers in the EHL as well as the NAHL’s Maryland Black Bears during the 18-19 season, before joining the Railers for their inaugural campaign for this year.
“While George put up solid numbers offensively playing at the junior level before joining us here in Worcester this year, there were no college offers forthcoming,” Addesa said. “George and I met on a regular basis and I helped him to break down his total game. In many ways, his ice awareness, his vision and his passing ability reminded me of the skills possessed by two of my former players – Joey Juneau and NHL Hall of Famer Adam Oates. Both were successful pros.

“Not unlike each of my former players, I began to teach George about becoming a more complete, three-zone player and about positioning his body at times in the form of a brush blocker,” Addesa continued. “George was eager to learn and his defensive play in all three zones improved tremendously, especially in his forechecking game. His ability to protect the puck and to engage a man by using his body in all three zones also improved tremendously. Adding these techniques to his already proficient offensive-skill game began to attract the attention of the college coaching audience and the offers began to come. Our coaching staff moved him from his most natural position, center, to left wing for the betterment of our lesser-talented team. This move also added to George’s growth and helped him to better understand the overall game. As I have stated to the colleges, George is now prepared to be an immediate impact player in his first year in the college game. George is a great young guy, an excellent student, a talented hockey player who made great sacrifices this year, all that will pay dividends in his future as a student hockey player in college.”

“Curry College is getting a talented young hockey player and an even more exceptional young man, said coach Mello. “On behalf of the Railers organization, we want to congratulate George Vonakis and his family on this wonderful achievement.” 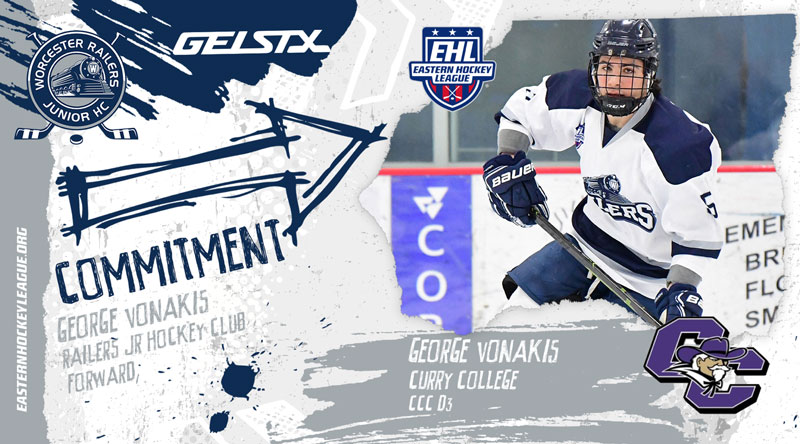