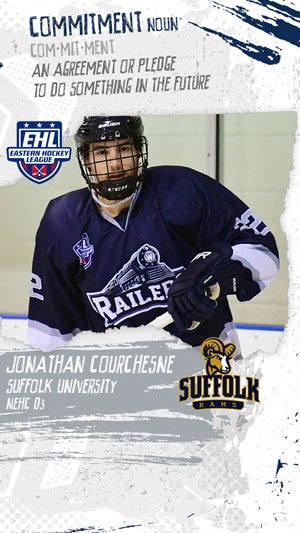 After mulling over several offers, Jonathan Courchesne, the captain of the inaugural Worcester Railers team in the Eastern Hockey League, has decided to attend Suffolk University next season.
The Rams are part of the rugged New England Hockey Conference. Courchesne is anxious about hitting the ice and starting his college career.

“Suffolk checks off a lot of boxes for me,” he said. “Being in the center of Boston and having the opportunity to further my education while playing the game I love is special to me. I’m thankful for the opportunity and I’m excited to get things going this fall.”

Courchesne, from Springfield, VT, was one of the top forwards during his time with the Railers. He finished the campaign with an overall mark of 20 goals and 16 assists.

“Jonathan Courchesne will forever hold a special place in the Railers organization as the first young man to ever wear the “C” for our program in Worcester,” said Railers head coach James Mello. “He is the true definition of a college student-athlete, his performance in the classroom is nothing short of exceptional. Jon was a leader for us on and off the ice this year, which was no easy task in a first-year program. I watched him grow tremendously as both a leader and hockey player over the course of the season.”

“I was honored to be selected by the coaches to serve as our team captain,” Courchesne said, “Coach Mello and I had a lot in common. I was serving as a captain for the first time in my junior hockey career, and coach Mello was serving as a head coach in his first year in junior hockey. I thought we built a great partnership. We learned from each other as together we made every effort to lead this team as we were charged to lead an expansion team that needed to be constructed in a very short period of time.

“We learned from each other as together we made every effort to lead this team as we were charged to lead an expansion team that needed to be constructed in a very short period of time.”

The adjustment for Jon in his new role started slowly in September and gradually the quality of his play progressed through October and November. He blossomed on the ice in December as his offensive game began to click. That continued through the remainder of the year. And in January, in the Road to College International Hockey Showcase, playing against outstanding CEJEP teams from Quebec, Courchesne exploded as a goal scorer and he continued to score goals on a regular basis, especially throughout the month of January.

“The support of my coaches allowed me to build great confidence and from game to game I couldn’t wait to get on the ice again and lead my team to the best of my ability,” he said.

“Jon’s dad, Andy, approached me three years previous and asked me if I would get involved in helping his son to continue to develop his play in the game of hockey,” Mike Addesa said. “I began working with Jon and helped him to secure a spot in prep school. I then took him with me as I developed the college prep program within the Seacoast umbrella. I found that Jon’s greatest strength was also his greatest weakness. He was an exceptional skater, so good that he would spend much of his time skating around the perimeter of the rink, especially in the offensive zone, with the puck on his stick, yet never bringing the puck to the net.

“I began to teach him how effective forwards attack the net offensively. I can remember meeting with Jon and his mom after a game and Jon expressed to me that he wished he could have gotten more shots on goal and therefore would have been a greater help to his team. I then explained to both he and his mother that he was a very intelligent student in the classroom making full use of his exceptional intellect and that he needed to treat the game of hockey as a classroom subject in the same manner he met the challenges in all his other academic pursuits. And if he did that I believed he would be more successful offensively.“

The creation of the Worcester Railers Junior Hockey Club allowed Jon to unite with coach Addesa, the general manager, and the Railers coaching staff in a direct teacher-student relationship.

“My challenge to Jon was the same and I told him that now I would be inflexible in terms of our demands of his game offensively. I re-stated that his approach had to be more academic and he had to register for Hockey 101, the newest of his educational classes,” Addesa said. “Working with coach Mello and coach Brian Addesa in guiding Jon he was directed to attack defensemen, drive them off the line, make an out-cut and then an in-cut, and to then align his left shoulder with the far post so that the blade of his stick would see nothing but net.

“We collectively told Jon that when he went to the net, he now had to see net only and never again see the goalie, and that every day he needed to work on every shot making contact with the net, and see any of the five open possibilities when he would release the puck,” Addesa continued. “Each month Jon saw improvement. And at the turn of the new year he had the art of the offensive attack down pat. Jon Courchesne continued to be an exceptional short-handed player. He had followed the strength and fitness regimen that had been laid out for him two years earlier. He is now very strong physically. He continued to be an exceptional player in all three zones defensively and he in this past year learned to become a very effective player on the power play. In early February, I sat down with Jon, and told him that finally, he had stepped over the biggest of hurdles in becoming an offensive hockey player and he was now ready to be a step-in, impact player in the world of college hockey.”

“In early February, I sat down with Jon, and told him that finally, he had stepped over the biggest of hurdles in becoming an offensive hockey player and he was now ready to be a step-in, impact player in the world of college hockey.”

“I would like to thank my mother, my father and my sister for their tremendous support throughout my career,” Courchesne said. “I want to thank coach Mello and the Addesa family. I owe Coach A a great deal for being inflexible with me and for directing me to register for his ‘Hockey 101’ class. Also, many thanks to the Bergeron family for allowing me and four of my teammates to live in their awesome house on beautiful Spring Lake this year. I would like to extend special thanks to Mrs. Bergeron for all of those delicious home-cooked meals that kept each of us very well-nourished throughout the entire season.” 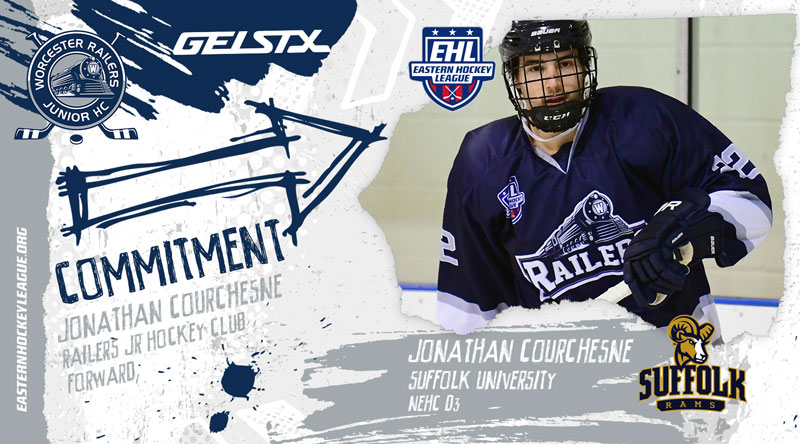