Top 68 Players Announced from Around the League

BOSTON, MA — The 2020 calendar year has been challenging for all of us across the globe, and it has made for a hockey season full of hurdles and obstacles. The Eastern Hockey League (EHL) is proud of its 18 member organizations for what we’ve accomplished so far this season, operating in the safest manner possible throughout our footprint. 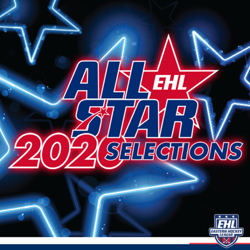 Of the many challenges that have presented themselves this season, the EHL has been forced to cancel all of our feature events to date, from the EHL Showcase Series to the EHL All-Star Series. A new event that was scheduled to debut this year was the EHL All-Star Classic presented by Dangle Sauce Hockey. The event was lined up to feature 60 of the top skaters from around the league, along with eight goaltenders. Despite attempts to change the dates and venue of the event, the league determined that in the best interest of safety for everyone involved, the EHL All-Star Classic could not be held this calendar year.

The EHL would still like to recognize all of the players that were nominated and selected to participate in this year’s event.

We would like to start be acknowledging all of the players that have committed so far this season, along with the four individuals who were set to serve as the Head Coaches for the four All-Star Teams at the event.

These coaches were going to help the league split the 68 players up into four rosters each featuring nine forwards, six defensemen, and two goaltenders.

Now, continuing on with the players, the league’s goal of the 2020 EHL All-Star Classic was to put on an event that featured a strong class of top players from all across the league. We also envisioned the round robin tournament as a chance for many uncommitted players to make an early-season impression on NCAA Coaches and Scouts.

Below you will find a breakdown of the forwards, defensemen, and goaltenders who would’ve been selected to participate in the 2020 EHL All-Star Classic.

The EHL would like to congratulate all of the players that were nominated and selected, as well as thank everyone who supported the league throughout the process.