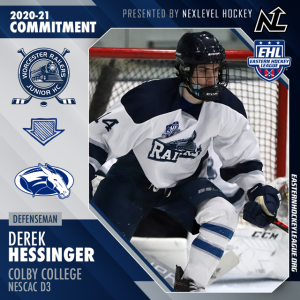 Railers Junior Hockey Club defenseman Derek Hessinger has announced that he has committed to Colby College for the Fall of 2021.

A native of Chesterfield, NJ, Hessinger joined the Railers EHL squad early on this season and has made a major impact on the blue line, playing in all situations.

“We are thrilled that Derek has reached his goal to be a student-athlete at Colby,” said Railers JHC head coach Sean Bertoni.

The blue liner is ecstatic with his decision to attend Colby, which plays in the New England Small College Athletic Conference (NESCAC).

“Over a two-year period I have become very impressed with the academic strength and the depth of academic offerings at Colby, and with the hockey program, their coaches and a beautiful, brand-new facility which is so impressive,” Hessinger said.  “I couldn’t be happier with the option I have chosen and the great opportunity that lies ahead of me.”

Last season, Hessinger played with the Maine Nordiques of the NAHL. “For a New Jersey guy I was really taken by the lifestyle in the state of Maine. After all, it is ‘Vacationland’.”

At that point, while sitting down with Nordiques Director of Player Personnel Eric Soltys, Soltys talked with Derek about his relationship with Mike Addesa, General Manager of the Worcester Railers Jr. Hockey Club of the Eastern Hockey League and indicated that if the opening were there for a right-handed defensemen, considering a move to the Railers with their more central location with relation to the NESCAC schools might be something to think about.

“I made contact with Coach Addesa and the opportunity was there so I decided to go to the Railers and I couldn’t have made a better decision,“ Hessinger said. “Also immediately as a result of Coach Addesa’s efforts, I was in touch with several NESCAC schools and I reconnected with Colby assistant coach Tyler Walsh, who I had met while playing with the Nordiques. The decision to become a Worcester Railer couldn’t have worked out any better. I am extremely excited to be going to a wonderful academic institution like Colby College and spending the next four years of my life in the state of Maine. I will be forever grateful to Eric Soltys for his suggestion to consider moving to Worcester and to all of the people associated with the Worcester Railers program.”

Hessinger stepped right in on the Railers blue line.

“With a great coaching staff, I began to learn so many details about playing the position defense in a way that I had never been taught before,” he said.  “We play in a great building. Our housing is second to none. We have great and hard-working coaches and I love my teammates.”

He says he has already improved tremendously as a player in his short time with the Railers.

“I have learned a lot about how to play in the defensive zone,” Hessinger said, “how to dictate to players in the D-zone, stick to our system and to play the position with great detail. Disciplined play in the defensive zone leads to offense. Coach Bertoni, as well as both Mike Addesas (Railers GM Mike and Railers assistant coach Mike III) have been extremely helpful.”

So, too, was former assistant coach Josh Monk, who left recently for a scouting position with the NHL’s Florida Panthers, as well as new associate head coach Mike Grace.

“Because of Derek’s intuition and ice awareness he has played a lot, not only 5-on-5 but on special teams as well,” Bertoni said. “Derek is a quiet leader and competes at a high level every day that he comes to the rink. His effort and dedication to the game have been tremendous.”

Growing up, Derek played with both the Mercer Chiefs and Team Comcast in his home state of New Jersey before spending his high school years at Shattuck St. Mary’s, a top prep program in Minnesota. To say the least, Derek has really enjoyed being a key part of the Railers junior hockey program.