It was a spilt decision this past week for the Worcester Railers Jr. Hockey Club’s EHL team.

The Railers Jr. Hockey Club started off the week with a tough 9-2 loss to the Boston Jr. Rangers on Tuesday, but redeemed themselves the following day with an exciting 7-5 win over the Valley Jr. Warriors.

In game one against Jr. Rangers the Railers got down in 4-0 early in the first period and could not come back.

Mid-way through the first, Jagger Benson (Lynnfield, MA) scored to make it 4-1, but the Jr. Rangers quickly responded back with two more giving them a commanding 6-1 advantage after the first period.

Tyler Drummond (Baldwin, NY) netted the Railers second goal in the second period. The Jr. Rangers added two more in the third to extend their lead to 9-2, giving them the victory.

In game two, the Railers were right back at it the next day an were able to put the loss behind them. This time, they were the team to have the big first period, earning five goals in the first 20 minutes alone against the Valley Jr. Warriors.

After getting down 1-0 early, the Railers struck back with two quick goals by Teagan McAvoy (Hailey, ID) and Mike DiMascolo (Cranston, RI). The Jr. Warriors came right back to tie the game at two, but again the Railers responded scoring three more goals in the period, two by Damon Dulac (Mascouche, QC) and one by Kolye Bankauskas (Coventry, RI) to give them a 5-2 lead after one.

In the second period, the Jr. Warriors scored twice cutting the Railers lead to one making it a 5-4 game.

20 seconds into the third period, Benson made it 6-4 on a powerplay goal and shortly after Brendan DeMarco (Lowell, MA) added another giving the Railers their three goal lead again.

The Jr. Warriors got one back later in the third to make it 7-5, but the Railers were able to hold on and secure the victory.

This week, the Railers Jr. Hockey Club will play Tuesday 1/19 against the East Coast Wizards at the Edge Sports Center (12:30 start) and Thursday 1/21 host the Western Mass Chiefs (11:30 am faceoff). 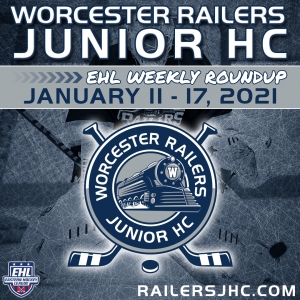 Jagger Benson’s first goal with the Railers JHC, against the Boston Jr. Rangers 1/12/21