The Railers Jr. Hockey EHL Premier Club continued its hot streak extending, its win streak to seven with two more victories this week. The Railers beat the Walpole Express 7-6 in a thrilling overtime win on Saturday and also won 5-1 against the Western Mass Chiefs on Sunday.

In game one, which was a back and forth battle between the two teams, it was the Railers that came out victorious in the end on Conor Donovan’s (Swampscott, MA) OT winner.

The Railers got down 1-0 early in the first period, and then responded with two goals by Cody Lambert (Belchertown, MA).

In a busy second period that saw seven goals scored between the two teams, Walpole scored four while the Railers scored three by Josh Sacco (Shrewsbury, MA), Lambert and Collin Berube (Groton, MA) to make it a 5-5 game after two periods.

Walpole went ahead early in the third period 6-5 and the Railers struck back on a goal by Nick Solari (Kingston, MA) to make it 6-6 and forcing overtime.

Four minutes into overtime, Donovan nailed one home to give the Railers the 7-6 win.

In Sunday’s game, the Railers scored first in this one on a goal by Preston Cloutier (Longmeadow, MA). The Western Mass Chiefs quickly tied it, but the Railers responded back with two more goals by Matt Lombardi (Hudson, MA) and Jayden Blackburn (Palmer, MA) to give them a  3-1 advantage.

Lambert added two more goals in the third period for the Railers giving him five goals on the weekend and sealing the 5-1 win.

Looking ahead, the Railers will host the Western Mass Chiefs 1/22 at 4 p.m. 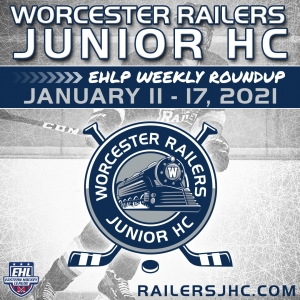