It was an even split for the Worcester Railers Jr. Hockey Club’s EHL team this past week. The Railers started off the week on Tuesday with a tough 4-2 loss to the East Coast Wizards, but came back strong on Thursday beating the Western Mass Chiefs 7-3 in a all-around great team effort.

Against the East Coast Wizards, the teams were scoreless through one period of play. Mid-way through the second period, the Railers jumped out to a 2-0 lead on goals by Damon Dulac (Mascouche, QC) and Kolye Bankauskas (Coventry, RI).

The lead was short-lived for the Railers however, as the East Coast Wizards would have a dominating third period scoring four times and ultimately winning 4-2.

In the week’s second game, the Railers were able to redeem themselves with a 7-3 victory over the Western Mass Chiefs behind big games from Bankauskas who had a hat trick and an assist and Matt Pimental (East Providence, RI) who contributed two goals.

Bankauskas put the Railers on the board early in the first, with the Chiefs scoring one of their own early in the second period making it a 1-1 game.

Shortly after the Chiefs tied the game, the Railers would explode for four goals in the period. Bankauskas added two, with Pimental scoring his first of the game and Anthony Marchant (Norwood, MA) adding a powerplay goal late giving the Railers a 5-2 lead.

The Railers then scored two goals in 10 seconds by Brendan DeMarco (Lowell, MA) and Pimental to give them a commanding 7-2 lead. The Chiefs added another later in the third, but that was all they could get as the Railers took this one.

This week, the Railers Jr. Hockey Club will play Monday 1/25 against the Seahawks Hockey Club at Tony Kent Arena (12:00 start), Wednesday 1/27 against the Boston Jr. Rangers at the Breakaway Ice Center (1:40 start) and Friday 1/29 when they will host the Valley Jr. Warriors (11:30 am faceoff). 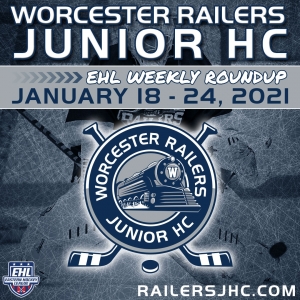