It was a busy week of games for the Worcester Railers Jr. Hockey Club’s EHL team. The Railers took two of three on the week, including a thrilling 3-2 overtime win in Friday’s game against the Valley Jr. Warriors. They began their week on Monday with a 4-2 victory over the Seahawks Hockey Club and then fell 4-2 Wednesday to the first place Boston Jr. Rangers.

In Friday’s game the Railers had an exciting comeback victory against the Valley Jr. Warriors that saw John Baker (Newton, MA) score the tying and the winning overtime goals.

The Railers were down 2-0 heading into the second period, when they turned on the heat and scored two goals by Brendan DeMarco (Lowell, MA) and Baker to tie the game at two.

After a scoreless third period, the teams headed into an overtime. At 1:44 of overtime Baker scored the winning goal. The assist to on the goal went to none other than the goaltender Stefan Kulhanek (Wein, Austria) to complete the Railers comeback.

Earlier, the Railers won 4-2 against the Seahawks Hockey Club starting their week off on the right foot. The Railers took a 2-0 lead in the first period with goals from Damon Dulac (Mascouche, QC) and Kolye Bankausakas (Coventry, RI) to give them an early advantage.

The Seahawks added one to start the second period, but the Railers came right back with two more goals scored by Matt Pimental (East Providence, RI) and PJ Donahue (Canton, MA) to widen their lead to 4-1. The Sewhawks would get just one third period goal.

Mid-week, the Railers took on the first place Boston Jr. Rangers and put up a good fight against them.

The Rangers scored twice early in the first to jump out to an early 2-0 lead. The Railers struck back with a goal late in the first by Pimental to cut the the Rangers lead to 2-1.

Mid-way through the second, Donahue tied the game at two with the assist going to Pimental.

The Railers were unable to hold off the Rangers in the third period as they would go on to score twice and take this one by a score of 4-2.

Next up, the Railers Jr. Hockey Club will play Wednesday 2/3 against the Boston Jr. Rangers at the Breakaway Ice Center (12:00 start) and Friday 2/5 against the Western Mass Chiefs (12:30 start) at the Olympia Ice Center. 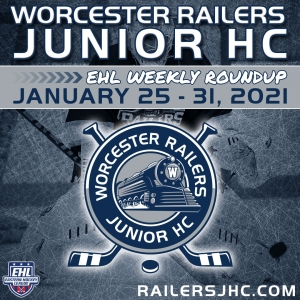