The Railers Jr. Hockey EHL Premier team swung back into action this weekend with a pair of games that they spilt. The Railers won Saturday 8-2 against the Western Mass Chiefs and lost Sunday 3-1 to the Walpole Express.

The Railers exploded for eight goals in Saturday’s game against the Chief with contributions up and down the line-up.

Cameron Blanchard (Burrillville, RI) and John Belisle (Cumberland, RI) got the scoring started for the Railers in the first period putting them up 2-0. The Chiefs got one back late in the first cutting the Railers lead in half.

It was all Railers in the second period as they would score three times with goals from Cody Lambert (Belchertown, MA), Zach Stimeling (Merrimack, NH) and Cameron Koretsky (Cranston, RI) to give them a commanding 5-1 lead.

In the third period, the scoring kept on coming for the Railers as they would tack on three more with Belisle and Lambert each scoring their second goals of the game and Jayden Blackburn (Palmer, MA) adding a short-handed goal.

The Chiefs would get one back in the third, but that is all they would get as the Railers cruise to the 8-2 victory.

In game two of the weekend, the Railers had a tough time getting any offense going as they would be held scoreless the first two periods of play.

Walpole took a 2-0 lead into the third period, but mid-way through Stimeling got the Railers on board with a powerplay goal cutting the lead in half.

The Railers were unable to score again as Walpole would add an insurance tally late sealing their 3-1 victory.

Next up this week, the Railers will host three home games this weekend Friday 2/5 against the Western Mass Chiefs (4:10 start), Saturday 2/6 against the Valley Jr. Warriors (12:30 start) and Sunday 2/7 against the Chiefs (3:30 start). 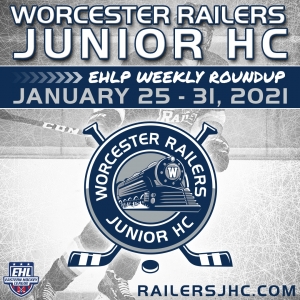