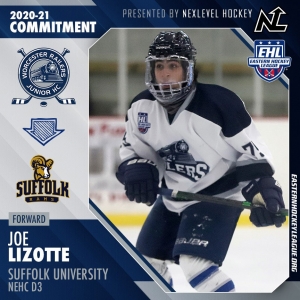 Suffolk, located in downtown Boston, is coached by Chris Glionna and plays in the New England Hockey Conference.

“I definitely had some other options, but I always wanted to be in Boston,” said Lizotte, who is in his second season with the Railers. “I am thankful this opportunity came about. It is something I couldn’t pass up.”

Railers head coach Sean Bertoni played a big role in getting Lizotte on the Suffolk radar. A former Suffolk player himself, Bertoni reached out to coach Glionna about watching Joey play. And things took off from there.

“A couple of weeks later, my parents and I spoke with coach Glionna on a Zoom call and found that this was the place I wanted to go and play. One of the biggest things was that they offer phenomenal business courses there.”

In 25 games played this winter with Worcester, Lizotte has seven goals and six assists. He has scored all three of the team’s shorthanded goals.

“Joe has been the heart and soul of the Worcester Jr. Railers organization,” said Bertoni. “A quiet leader who ignites our team on a regular basis, he provided a spark of energy with his quickness and speed. Joe is a perfect example of how the Junior process works, a high school kid putting in two years of hard work to get to the next level. I cannot say enough positive things about Joe Lizotte and I am thrilled he is going to have the opportunity to be a student-athlete at Suffolk University.”

Bertoni knew of Joey’s play in high school as his Oliver Ames teams played in the same league as Lizotte’s Franklin HS teams. Lizotte was one of his first calls two years ago.

“He said he was coaching with this new junior program and would like to have me be a part of it,” Lizotte said. “I wanted to play college hockey. It was an opportunity I couldn’t pass up.”

The former Franklin HS star credits the Railers staff with helping him get where he wanted to be.

“I can’t thank them enough,” he said. “They opened up a lot of windows for me, and taught me all concepts of the game. Coach (Mike) Addesa (Railers GM) specifically taught me how to be a leader, how to take a leadership role, and includes life lessons for us every day, how to be a good husband and father someday.”

A diminutive player at 5’4”,  Lizotte says Addesa has taught him how to use that to his advantage.

“He told me that size doesn’t matter. You have to compete every game,” he said. “If you have the confidence going into every game, I can use that to my advantage with my speed.”