It was a split decision this past week for the Worcester Railers Jr. Hockey Club’s EHL team. The Railers started off their week with a tough 5-1 loss to the Boston Jr. Rangers on Wednesday but redeemed themselves Friday with a 3-1 victory over the Western Mass Chiefs.

After falling behind 1-0 to the Chiefs early in the game, the Railers had a big third period scoring three times to come from behind and win.

Two minutes into the third period, John Baker (Newton, MA) scored to tie the game at one. Mid-way through the third, Kolye Bankauskas (Coventry, RI) scored a huge goal with assists to Baker and Tyler Drummond (Baldwin, NY) to give the Railers the 2-1 advantage.

Later in the third period, Brendan DeMarco (Lowell, MA) added an insurance goal to seal the win for the Railers.

Earlier in the week, Worcester fell 5-1 to the Boston Jr. Rangers. After taking a 1-0 lead in the first period with a goal from defenseman Jagger Benson (Lynnfield, MA), it was all the Rangers the rest of the way, as the Railers were unable to get anything else going offensively in this one.

The bright side of the game for the Railers was goalie John Profaci (Madison, NJ) who had a strong game in net finishing with 33 saves.

Next up, the Railers Jr. Hockey Club will play Thursday 2/11 at home against the Western Mass Chiefs (11:30 AM start) and Friday 2/12 against the Valley Jr. Warriors at the Chelmsford Forum (12:00 start). 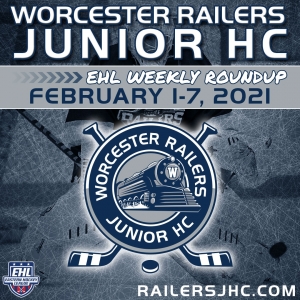