The Worcester Railers Jr. Hockey EHL Premier team had a busy but productive weekend. The Railers had three games and won them all in exciting fashion.

They started the weekend off with a 3-1 victory over the Western Mass Chiefs on Friday, won 8-0 against the Valley Jr. Warriors on Saturday and ended the weekend Sunday afternoon with a 3-1 win over the Chiefs.

After getting down 1-0 to the Chiefs in the first period, the Railers came back with two in the second on goals by Spencer Clark (Chicopee, MA) and Cameron Blanchard (Burrillville, RI) to take a 2-1 lead.

In game two, the Railers exploded for eight goals against the Valley Jr. Warriors in an all out team effort.

Matt Pacheco (Belchertown, MA) got the scoring going in the first period to make it 1-0. The Railers added four more in the second on goals by Conor Donovan (Swampscott, MA), Zach Stimeling (Merrimack, NH), and two by Lambert.

In the third, Worcester continued to pile on the goals and added three more by Jerry Duckett (Holtsville, NY), Jayden Blackburn (Palmer, MA) and Stimeling again to make it an 8-0 game.

In their final game of the weekend, the Railers picked up right where they left off the night before. They started out the game with a short-handed goal by Blackburn to take a 1-0 lead over the Chiefs. Early in the second period, Lambert added his fourth goal of the weekend on the powerplay to make it 2-0.

The Chiefs cut the lead in half late in the second, but mid-way through the third Cameron Koretsky (Cranston, RI) added a key insurance goal to give the Railers a 3-1 win.

Sal Caruso (Stoneham, MA) was solid in net with 23 saves. 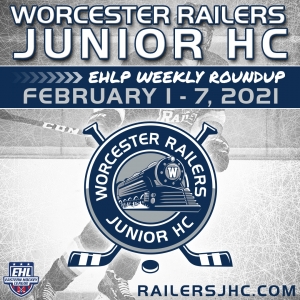 Jerry Duckett picks the corner vs. the Valley Jr. Warriors 2/6/21