It was two up and one down for the Worcester Railers Jr. Hockey Club’s EHL Team. The team started off the week strong with a 5-2 win over the Western Mass Chiefs on Tuesday, then fell 6-3 to the same Chiefs on Thursday before redeeming themselves with an exciting 2-1 comeback victory over the Valley Jr. Warriors on Friday.

In the first game of the week, Kolye Bankauskas (Coventry, RI) got the scoring started early in the first for the Railers.

Shortly after, the Chiefs tied the game at one and then the Railers exploded with a huge second period getting three goals from Brendan DeMarco (Lowell, MA), John Baker (Newton, MA) and Damon Dulac (Mascouche, QC) to take a 4-1 advantage.

The Chiefs got one back early in the third, but then Worcester came right back with another goal, this time from Teagan McAvoy (Hailey, ID) to secure the 5-2 win.

Two days later, these two teams met again as the Chiefs were looking to get the upper hand this time around.

The Railers started off the game strong getting two first period goals from Bankauskas and Tyler Drummond (Baldwin, NY) to give them an early  2-0 lead.

Following that, it was all Chiefs as they would score four times in the second period to take control of the game going up 4-2.

A minute and a half into the third period, Mike DiMascolo (Cranston, RI) got the Railers within one, but yet again the Chiefs responded with two more later in the third to secure the 6-3 victory and spilt the week with the Railers.

In their final game of the week, the Railers rebounded with a comeback win over the Valley Jr. Warriors.

After a scoreless first period, it was the Warriors that struck first early in the second period. With the game still 1-0 heading into the third, Dan Long (Guilford, CT) tied the game with a huge goal five minutes into the period.

At 17:38 of the third, Matt Pimental (East Providence, RI) scored the winning goal for the Railers to complete the comeback win and end the week on a high note. Stefan Kulhanek (Wein, AUT) played great in goal totaling 26 saves. 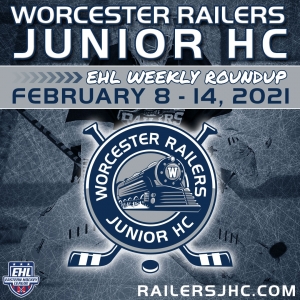