The Worcester Railers Jr. Hockey Club EHL Premier team started the week off on a high with a great 4-2 comeback win over the Western Mass Chiefs on Friday and fell 5-1 to the Boston Jr. Rangers on Sunday night snapping their four-game win streak.

In Friday’s game, the Railers fell behind 1-0 one minute into the game. Late in the first period they tied the game on a Matt Pacheco (Belchertown, MA) powerplay goal.

The second period was quiet for the Railers as it was the Chiefs that scored the lone goal to take a 2-1 lead.

With the Railers trailing to start the third period, they would score three times to take home the victory.

Two minutes into the period, Jayden Blackburn (Palmer, MA) scored the tying goal. Later in the period, Ethan Blanchard (Burrillville, RI) scored the go-ahead goal for the Railers giving them the lead late.

In their second game of the weekend, the Railers were trying to keep the win streak going but unfortunately ran into a tough Boston Jr. Rangers team.

These two teams have now met seven times on the season with the Rangers getting the edge winning five of those match-ups.

After a scoreless first period that saw each side total nine shots apiece, the Rangers broke the game open scoring four times in the second period.

They would score one more in the beginning of the third to take a commanding 5-0 lead over the Railers. Worcester did score one mid-way through the third on a goal by Nick Solari (Kingston, MA) with the assist to Dennis Morehouse (North Attleboro, MA) but that is all they would get as they fell in this one. 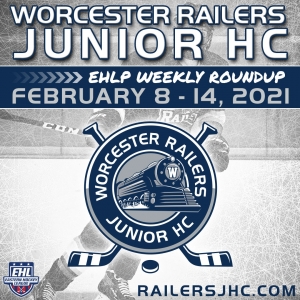 Jayden Blackburn snaps home a goal vs. the Chiefs 2/12/21