It was a tough week for the Worcester Railers Jr. Hockey Club’s EHL team. The team played two games and came up short in each as they look to get back on track for the final week of the regular season.

The team started off the week with a 3-1 loss to the Boston Jr. Rangers on Tuesday and then fell to the Western Mass Chiefs 5-3 on Wednesday.

In Tueday’s game, the Railers got down 2-0 early to the Rangers. Late in the second period, Kolye Bankauskas (Coventry, RI) scored a powerplay goal for the Railers to cut the lead to 2-1.

The Rangers added another mid-way through the third to seal the 3-1 victory.

The bright side of the game for the Railers was goalie Sebastian Woods (Limehouse, ON), who was playing in this first game with the club. Woods played outstanding, totaling 39 saves.

In game two of the week, after a scoreless first period, it was the Railers that struck first early in the second on a goal by Conor Donovan (Swampscott, MA) to make it 1-0.

The Chiefs followed that up with two goals of their own to quickly take the lead. With one minute left in the second period, Rory White (Worcester, MA) tied the game at two.

To start the third period, the Chiefs added two more to take back the lead. The Railers cut the Chiefs lead to one shortly after on a goal by Colin Roe (Hyde Park, MA) to make it 4-3.

With 30 seconds left in the game, the Chiefs scored an insurance powerplay goal to win the game 5-3.

The Railers will finish off their 20-21 regular season this week with two final games. They will play Monday 2/22 hosting the Chiefs (11:30 am start) and Friday 2/26 where they will travel to the Chelmsford Forum to take on the Valley Jr. Warriors (12 noon start). 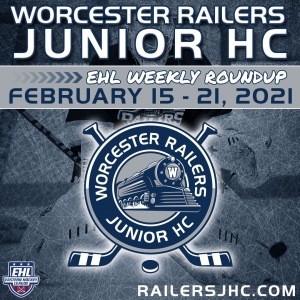 Sebastian Woods almost saves them all vs. the Rangers 2/16/21