The Railers started off the weekend with an 8-3 win over the Western Mass Chiefs on Friday, beat the Valley Jr. Warriors 5-0 on Saturday and beat the same Chiefs 6-1 Sunday.

The line of Cody Lambert (Belchertown, MA), Matt Lombardi (Hudson, MA) and Cameron Koretsky (Cranston, RI) exploded for 25 points in the three games to help lead the team to victory.

In game one of the weekend, the Railers jumped out to an early 3-0 lead over the Chiefs on two goals by Lambert and one by Lombardi.

The Chiefs got one back to begin the second period, but again the Railers scored three more times to take a commanding 6-1 lead. Lombardi scored two more to earn the hat trick and Collin Berube (Groton, MA) scored the other.

To start the third period, the Chiefs cut into the Railers lead with two more goals, but Worcester came right back with goals by Dennis Morehouse (North Attleboro, MA) and Ethan Blanchard (Burillville, RI) to extend the lead to 8-3 and they would go on to win by that score.

In game two, the line of Lambert, Lombardi and Koretsky accounted for the game’s first four goals with Lombardi scoring two and Lambert and Koretsky each adding one.

Late in the third period, Josh Sacco (Shrewsbury, MA) added a fifth goal for the Railers as they would cruise to 5-0 win over the Valley Jr. Warriors.

In their final game of the weekend, the Chiefs took a 1-0 lead into the second period. That is when the Railers scored four times, taking control of the game. John Belisle (Cumberland, RI), Ethan Blanchard, Lambert and Jayden Blackburn (Palmer, MA) all scored to put the Railers up 4-1.

The Railers would add two more in the third period on goals by Berube and Blackburn’s second of the game to account for the 6-1 final.

The Railers will end their 20-21 regular season with three final game this upcoming weekend. 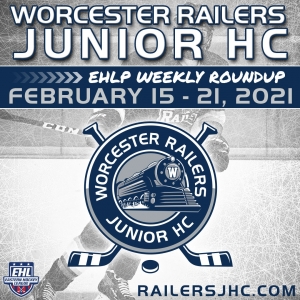 Matt Lombardi earns the hattrick off a redirect vs. the Chiefs 2/19/21

Cameron Koretsky knocks in the loose puck vs. the Warriors 2/20/21