The Worcester Railers Jr. Hockey Club’s EHL team finished off their last week of the regular season on a high note.

The Railers won their final two games beating the Western Mass Chiefs on Monday 5-1 and downing the Valley Jr. Warriors 5-2 on Friday.

Worcester finishes the regular season with a record of 18-20 and is seeded fourth heading into the EHL First Round of the playoffs. In a Central Division First Round series, the Railers will take on the fifth-seeded East Coast Wizards in a best two out of three series, starting on Wednesday March 3. Game 1 is scheduled for 11:30am at the Worcester Ice Center.

The Railers started off their first game of week on the right track getting on board first late in the first period on a goal by Matt Pimental (East Providence, RI). They continued the scoring into the second period where Hayden Goldstein (Los Angeles, CA) and Colin Oppelt (Frankin, MA) each added a goal to make it 3-0.

The Chiefs would get one back late in the second, but the Railers kept on scoring as Mike DiMascolo (Cranston, RI) would add two huge third period goals to seal the 5-1 win.

In their final game of the regular season, the Railers wasted no time getting on board as 1:54 into the game, John Baker (Newton, MA) got the scoring started.

The Valley Jr. Warriors tied the game at one shortly after, but the Railers came right back as Kolye Bankauskas (Coventry, RI) would score to make it 2-1.

The Warriors scored to cut the lead in half, but Damon Dulac (Mascouche, QC) scored a key goal late in the second that would complete the Railers 5-2 win.

Stefan Kulhanek (Wein, AUT) had a great game in net for the Railers, totaling 38 saves.

The EHL Worcester Railers JHC finished #4 in the Central Division and will take on the #5 seeded East Coast Wizards in a best-of-three series. 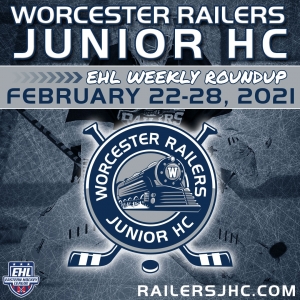 Colin Oppelt tucks it in against the Chiefs 2/22/21