It was a busy final weekend of regular season play for the Worcester Railers Jr. Hockey Club EHL Premier team.

The Railers started off the weekend with two tough losses, but rebounded to win their final game of the regular season. Worcester lost Friday 3-1 to the Boston Jr. Rangers and Saturday 5-4 to the Walpole Express but finished with an 11-0 rout of the Valley Jr. Warriors on Sunday.

Worcester finishes the season with a 24-12 record and is seeded second heading into the EHL Premier First Round of the Playoffs. They will take on the third-seeded Walpole Express in a best two-out-of- three series that will start next Wednesday March 10 at 6:10pm at the Worcester Ice Center.

In the Railers first game of the weekend, it was the Boston Jr. Rangers that jumped out to an early 1-0 lead. They would hold that lead until late in the second period when Matt Pacheco (Belchertown, MA) tied the game at one.

The Rangers came back with two in the third, including an empty-netter ultimately giving them the 3-1 win.

In game two, it was the Railers that jumped out to the early 2-0 lead on goals by Ethan Blanchard (Burrillville, RI) and Jayden Blackburn (Palmer, MA). Following that, it was all Walpole as they would score four times in the second period to gain control of the game.

Early in the third, the Express scored again upping their lead to 5-2.

Mid-way through the third period, Cameron Koretsky (Cranston, RI) scored to make it 5-3 and minutes later John Belisle (Cumberland, RI) made it a one-goal game. The Railers comeback however would fall short as they would lose 5-4.

In their final game of the regular season the Railers exploded for 11 goals, where everyone on the team got in on the fun.

Blackburn would add his second of the game in the second period to increase the Railers lead to 6-0.

In the third period, the Railers had another explosion of goals, that saw Nick Solari (Kingston, MA) added two goals, and TJ Ezzard (Vienna, VA), Ethan Blanchard and Duckett all each add one to seal the 11-0 win and end their regular season on a high note.

The EHLP Worcester Railers JHC finished #2 in the Central Division and will take on the #3 seeded Walpole Express in a best-of-three series. 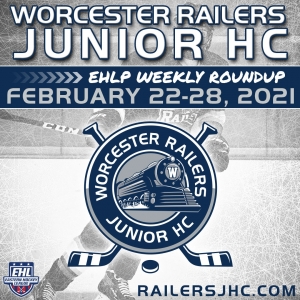 Jayden Blackburn scores on the rush vs. the Warriors 2/28/21

Jerry Duckett scores on the rebound vs. the Warriors 2/28/21