The Worcester Railers Jr. Hockey Club’s EHL team is moving on to the next round after a thrilling 7-6 overtime win over the East Coast Wizards in the third and deciding game of the exciting series.

The Railers kicked off the First Round of the EHL playoffs by taking Game one on Wednesday by a score of 5-3, lost game two 6-4 on Thursday and won the series Sunday on Colin Oppelt’s OT winner.

In game three, which was an elimination game the Railers rallied from a two-goal deficit in the third period in what was a crazy back and forth game.

With the win, Worcester will now advance to the Second Round of the EHL Playoffs will they will take on the Central Division top-seeded Boston Jr. Rangers. Game 1 is Tuesday March 9th at 1pm at Breakaway Ice Center. The Railers will host Game 2 on Thursday at 11:30 am and if a Game 3 is needed, it will be on Friday at 1pm, back at Breakaway.

The Railers started off game three taking a two-goal lead in the first period on goals by John Baker (Newton, MA) and Mike DiMascolo (Cranston, RI). The Wizards then scored two goals in 30 seconds to tie the game at two.

Shortly after that, Worcester scored two more goals in what was a busy first period on goals by Hayden Goldstein (Los Angeles, CA) and Conor Donovan (Swampscott, MA) to take a 4-2 lead.

The Wizards then exploded for a four-goal second period to take a 6-4 lead heading into the third period.

10 minutes into the third period, the Railers cut the lead to one on Donovan’s second of the game and minutes later tied the game at six on a goal by Dan Long (Guilford, CT).

Oppelt (Franklin, MA) scored 2:09 in OT to complete the Railers comeback victory and send them to the second round.

In game one of the series, the Railers started off on a high-note. They quickly got on the board in the first period getting two goals by Damon Dulac (Mascouche, QC) and Matt Pimental (East Providence, RI). Mid-way through the first the Wizards cut the lead in half and then early in the second period tied the game at two.

The Railers came right back with goals by Rory White (Worcester, MA) and Kolye Bankauskas (Coventry, RI) to take back their two-goal lead. They also added an insurance goal early in the third on Dulac’s second of the game.

The Wizards got one back late in the third period, but it wasn’t enough as the Railers would take game one.

In game two, the Wizards started off taking the lead, but shortly after Worcester tied the game on a goal by Baker. The game went back and forth as 41 seconds into the second period, the Wizards took a 2-1 lead and the Railers came right back to tie it on a goal by Long.

After the Wizards took the lead again, Worcester rallied to take a 4-3 lead on goals by DiMascolo and Joe Lizotte (Franklin, MA).

It was all Wizards in the third period as they would score three times and ultimately win 6-4.

The Worcester Railers Jr. Hockey Club EHL Premier team will open up its playoffs taking on the Walpole Express Wednesday at home at 6:10 in a Game 1 of a Best-of-Three series. Game two will be Friday at Rodman Arena at 4:30 pm. If necessary, game three will be Sunday (6:10 pm) at Worcester.

The EHL Worcester Railers JHC knock off the #5 seeded East Coast Wizards and move on to the 2nd round of the EHL Playoffs to face the #1 seeded Boston Jr. Rangers in a best-of-three series. 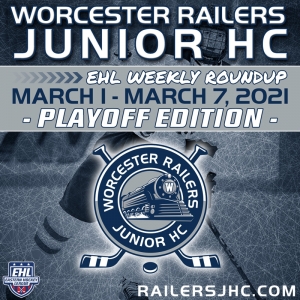