The Worcester Railers Jr. Hockey Club’s EHL team season came to a conclusion after falling in their second round playoff series to a tough Boston Jr. Rangers team.

The Railers knew it wasn’t going to be easy, but gave it their all. They lost game one Tuesday 5-2 and fell 6-0 in game two on Thursday.

Game one started fast as there were three goals in a span of 19 seconds early on to get the series going. Fifty-eight seconds into the game the Rangers scored to take a 1-0 lead and 11 seconds later, the Railers responded right back on a goal by Brendan DeMarco (Lowell, MA) to tie the game.

The Rangers came right back just 8 seconds later to re-take the lead, making it an exciting first few minutes of play.  Later in the first, the Rangers upped their lead to 3-1.

Mid-way through the second period, the Railers cut the Rangers lead to one on a goal by John Baker (Newton, MA) with the assist to Tyler Drummond (Baldwin, NY).

Not long after that, the Rangers came right back to regain their two-goal lead making it a 4-2 game. They would add an empty-net goal late in the third period to win 5-2 and take the first game.

In game two, which was a do or die game for the Railers they were unable to get anything going offensively against the Rangers this time around.

The game was 1-0 Rangers heading into the second period, leaving the Railers plenty within striking distance. But, the Rangers had other ideas opening up the game scoring three times to make it 4-0.

In the third period, the Rangers added to their lead getting two more goals in a 20 second span giving them the 6-0 advantage and the series win.

A bright spot of the game for the Railers was goaltender Sebastian Woods (Limehouse, ONT), who totaled 39 saves in the loss. 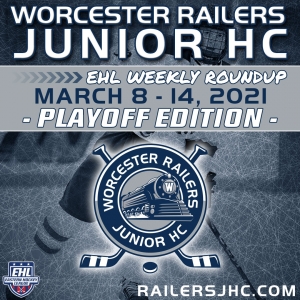