The Worcester Railers Jr. Hockey Club’s EHL Premier team is moving on to the next round after taking its Second Round best-of-three series from the Walpole Express.

The Railers won big 7-1 Sunday night in the third and deciding game of the series.

The Railers kicked off the series by taking game one on Wednesday winning 6-1, they lost game two 3-0 on Friday.

With the win, the second-seeded Railers will move onto the Third Round of the EHLP Playoffs when they take on Central Division top-seeded Boston Jr. Rangers. Game 1 is Wednesday March 17 at 2:20 pm at Breakaway Ice Center. The Railers will host Game 2 on Saturday March 20 at 330 pm and if a Game 3 is needed, it will be Monday March 22 at 2 pm, back at Breakaway.

Worcester started off the first game against the Express by taking a 1-0 lead early on a powerplay goal by Ethan Blanchard (Burrillville, RI). One minute later, Walpole tied the game at one.

In the second period, Jake Barcelou (Hyde Park, MA) made it 2-1 Railers as they were clinging to a tight lead.

In game two, the Railers couldn’t get any offense going. After a scoreless first period, the Express scored twice in the second period to go up 2-0.

The Express added an empty-net goal late in the third period to 3-0 and force a deciding game.

Despite 35 shots on net, the Railers could not find the back of the net leaving them in a win or go home situation heading into game three.

In game three, the Railers had all cylinders working. Worcester went up 1-0 at the end of the first period on a goal by Jayden Blackburn (Palmer, MA).

They took that lead into the second period and exploded for five goals to break game wide open.

The Railers got goals from five different goal-scorers. Lombardi got the socring going, followed by Blackburn’s second of the game. The other three were scored by Nick Solari (Kingston, MA), Zach Stimeling (Merrimack, NH) and Cameron Koretsky (Cranston, RI) to go up 6-0.

The Express got one back in the beginning of the third period, but that is all they would get. Solari added one more for the Railers later in third to seal the 7-1 win for the Railers advancing them to the next round.

The EHLP Worcester Railers JHC defeated the Walpole Express in Round 2, and move on to face the #1 seeded Boston Jr. Rangers in a best-of-three series. Winner goes to the Frozen Finals! 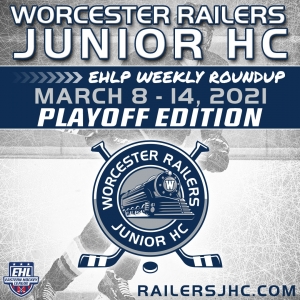 Railers EHLP #GetOnBoard for Game 3 vs. the Express!