The Worcester Railers Jr. Hockey Club’s EHL Premier team is moving on to the Frozen Finals after a thrilling 3-2 overtime win over the Boston Junior Rangers in the third and deciding game of the Central Division series.

Worcester kicked off the Third Round of the playoffs by taking game one on Wednesday 2-1 in overtime, lost game two on Saturday 7-1 and won the series Monday.

“I was so proud of our team,” said head coach Mike Adessa III”. “Despite what felt like a very big loss on Saturday, they came to play Monday.  They played so hard, up and down the entire roster, we got an incredible effort out of every player.  Even though we went down 2-0 after two Rangers PPG, the team never gave up.  They stuck to the script, they did the things they were asked to do and they sacrificed and put the team first. When all was said and done we came out on top.  It was a total team effort.”

With the win, the Railers now advance to the Frozen Finals held at the Ice Line Quad Rinks in West Chester, PA Quite an accomplishment for a second year program. Game 1 will be Saturday March 27 at 2:30 pm against the Lumberjacks Hockey Club and Game 2 will also be Saturday at 7:30 pm against the New Jersey 87s. If they make the EHLP championship game, it would be Sunday March 28 at 11am.

After a scoreless first period in game three, the Rangers struck first scoring two power play goals in the second to go up 2-0.

The Railers fought back to score two goals in 24 seconds in the third period on goals by TJ Ezzard (Vienna, VA) and Matt Lombardi (Hudson, MA) to tie it and force overtime.

Worcester started off the series in game one with a big overtime win as well. The Railers scored 15 minutes into the first period on a goal by Jayden Blackburn (Palmer, MA).

After a scoreless second period, the Rangers scored ten minutes into the third to tie the game and force overtime.

The Railers wasted no time as 33 seconds in to overtime, Lombardi scored the game winner unassisted.

The second game of the series proved to be all Rangers. They held a slim 1-0 lead heading into the second period where they exploded for five goals to open up a 6-0 lead.

They would add one more in the third to extend their lead to 7-0. The Railers scored one in the final 30 seconds of the game on a powerplay goal by Matthew Schirm (Auburn, MA), but that is all they would get. 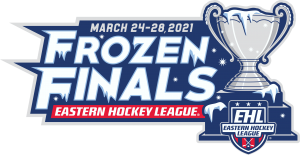 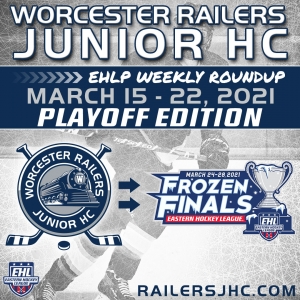 Dennis Morehouse advances the Railers to the Frozen Finals with his Game 3 OT goal!