The Worcester Railers Jr. Hockey Club’s EHL Premier team made a great run at it, but ultimately fell 5-2 to the New Jersey 87s in the Frozen Finals EHLP Championship game on Sunday at Ice Line Quad Rink in West Chester, PA.

But, as a second-year club, the Railers have so much to proud of.

Worcester kicked off its first Frozen Finals trip in a big way in game one against the Lumberjack Hockey Club.

The Railers jumped out to a 3-0 lead in the first period with two huge goals from Matt Pacheco (Belchertown, MA) and one from Matt Lombardi (Hudson, MA).

The Lumberjacks got on the board with one at the end of the first period to cut the Railers lead to 3-1.

After a scoreless second period, the Railers held their 3-1 lead into the third. Ethan Blanchard (Burrillville, RI) made it 4-1 at the beginning of the third, but shortly after the Lumberjacks responded back cutting the Railers lead in half.

With the Railers up 4-2, they kept the scoring going and got two more later in the third period on  goals by Zach Stimeling (Merrimack, NH) and TJ Ezzard (Vienna, VA) to seal their 6-2 victory.

The 87s took a 1-0 lead into the second period where they added to their lead scoring two more to put the Railers in a 3-0 hole.

Worcester never let up and it paid off as they would score two goals in 26 seconds to end the second period. Jayden Blackburn (Palmer, MA) got the scoring starting with a power play goal at 18:03 and then at 18:29 Jake Barcelou (Hyde Park, MA) scored to cut the 87s lead to 3-2 setting up for an exciting third period.

In the end, that is all the scoring that the Railers would get as it was all New Jersey in the third period. The 87s scored two more goals to seal the 5-2 win and win the EHLP Championship. 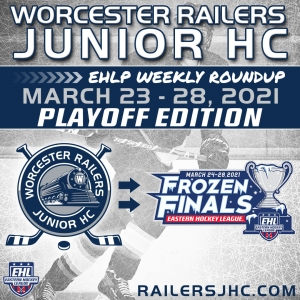 Ethan Blanchard buries the rebound vs. the VT Lumberjacks in round-robin play of the Frozen Finals

Matt Pacheco roofs it off the faceoff in round-robin play of the Frozen Finals vs. the VT Lumberjacks

Sal Caruso solid in net in round-robin play of the Frozen Finals vs. the VT Lumberjacks