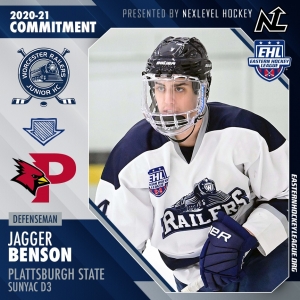 Worcester Railers Junior Hockey Club blueliner Jagger Benson will call the State University of New York Athletic Conference (SUNYAC) home for the next four seasons, as he recently announced he has committed to Plattsburgh State University for the 2021-22 campaign.

Benson impressed after joining the Railers in January, playing in 14 regular season games and picking up three goals and three assists, and also skating in all five Worcester playoff games in the EHL’s Central Division.

“Jagger was a great addition to our team. He competes at a high level and was willing to learn the second he joined our program,” said Worcester head coach Sean Bertoni. “He is a guy that wants to contribute and help his team win. Jagger was a fun kid to coach. an impact player, and we are extremely excited for his commitment at Plattsburgh.”

“To me, both academically and athletically, it’s a great fit,” said Benson, who played the previous two seasons in the prep school ranks at Tilton School. “I am very impressed with the learning center and the academic support it lends to all students. In terms of athletics, and hockey in particular, the facilities are excellent. Plattsburgh has a great campus and amazing arena.”

Upon joining the Railers just after the New Year, things happened quickly for Benson with regards to the next step in his hockey career.

“Mike Addesa, our General Manager, began to contact a lot of schools about me and the other new additions to the Railers program,” said the Lynnfield MA native. “We began to talk about many possibilities. Mike Grace, the coach of the defensemen in the Railers program, played for Plattsburgh and explained to me what life would be like as a student athlete there. Coach Bertoni also really respected Plattsburgh as a great program.”

“Coach Grace indicated he had contacted Plattsburgh for me and I heard from coach (Steve) Moffat almost immediately. He was the first coach to reach out to me. He and our coaches worked together so that I could visit Plattsburgh soon thereafter. He showed me a tremendous amount of love and that meant a lot to me, especially after feeling like a forgotten man. It was great to be wanted again.”

The defenseman had many options, 17 in all when it was all said and done. 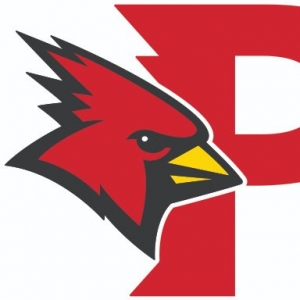 “It was a good feeling,” he said. “As I was narrowing down my choices, it came down to three schools. Our Railers coaches stressed to me that the final decision was mine and I was going to be the person going to that particular school for four years. Ultimately, it was a hard decision but I felt that I would be most comfortable being a student athlete at Plattsburgh. I also want to mention my gratitude to the Tilton School, where I spent two years improving my study habits and overall grades, and to coach Brooks McQuade for guiding me through those two years.”

Benson felt comfortable right away upon arriving at the Worcester Ice Center.

“All the guys were so welcoming,” he said. “We had several additions who came in about the time as myself and we were all accepted right away. Any new guy who stepped into the Railers locker room was accepted as one of the group. That is a great testament to the strong culture that the Railers have developed in Worcester.”