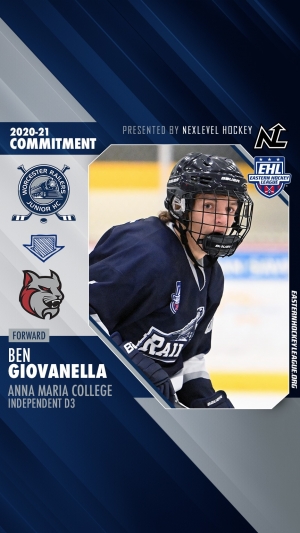 Ben Giovanella is the latest member of the Worcester Railers Junior Hockey Club to announce his commitment to further his career in the college ranks, at Anna Maria College for the 2021-22 season. Located in Paxton, MA., Anna Maria is a fairly new NCAA program (three seasons) that plays as a Division 3 independent.

The combined program offered at Anna Maria College of Fire Sciences as a major and NCAA collegiate hockey appears to be a perfect fit for Giovanella.

“In watching our opponents very closely, I became attracted to the way Ben carried himself in each game while playing for the Express,” said Addesa. I really felt he could fill a void as player that could play on a momentum line and help us on our shorthanded teams.”

“(GM) Mike Addesa called me right away and said I was going to become a Railer,” said Giovanella, who has already begun the process of becoming a firefighter in his hometown of Medway, MA. “I was really excited hearing that as it was still close by for me geographically. And it was a new team with a new possibility. Little did I know at that time that Anna Maria College had a major in Fire Sciences and their campus was only eight miles away from the Worcester Ice Center where I spent the year playing hockey. For many years I have aspired to serve the public as a firefighter.”

“Ben was a very hard-working, very well-liked, team-first guy,” said Railers coach Sean Bertoni. “He brought both depth and experience to our team and was a positive influence on every one of his teammates.”

Right away, Giovanella became one of the team’s top penalty killers. His 5-on-5 play on a momentum line, while sacrificing some of his offensive skills, really helped the Railers move up in the standings. Unfortunately, Ben came down with Covid and missed an extended amount of time, which proved to be a major loss for the Railers. He eventually made it back and because of his illness, was used sporadically in the lineup. He put up seven points in 16 games played during the season. His contribution and value to the team extended way past the amount of points he scored.

Once in the fold, the Railers didn’t waste any time helping Ben get to the next level.

“Mike Addesa, our general manager, knowing of the Fire Sciences major at Anna Maria, spoke to coach (Dave) McCauley and put me on the Anna Maria radar,” said Giovanella, who played his high school hockey for Medway HS. “Coach McCauley and assistant coach (Connor) Mauro came down to watch a couple of our games. Mike Addesa did a lot of work for me and I really appreciate it. I can’t thank Mike and the staff enough.”

The experience playing for the Railers also was a big boost for Giovanella’s confidence and knowledge on the ice.

“They helped me a lot,” he said. “They really helped me up my game, teaching me ice awareness and the finer points of the defensive side of the game all over the ice. I am a much more complete player now that I have completed one year playing in the Railers program.

“The culture in the Railers program is unbelievable. It is like a brotherhood. I have never been on a closer team where each player cared so much about every other player.”

“We are excited that Ben will be living his dream being a student-hockey player at Anna Maria College,” said coach Bertoni.