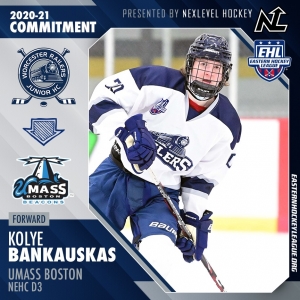 Kolye Bankauskas’ long journey to finalizing his move to the next level is now finally over. The Worcester Railers Junior Hockey Club centerman has announced he has committed to the University of Massachusetts-Boston for the Fall of 2021 after surveying an incredible number of college offers.

“It feels great, it has been a very long time coming,” said Bankauskas. “It has been a long and difficult journey through junior hockey and I am glad to be able to finally close it out. I am extremely happy to commit to UMass-Boston and coach (Peter) Belisle.”

A native of Coventry, RI, Bankauskas started this season playing in the NAHL with the Northeast Generals, that after putting up an eye-popping 138 points for the Generals NA3HL club (69 goals, 69 assists) during the 2019-2020 season. He joined the Railers in early January and has been a huge part of the team’s offensive success since he has been in their lineup.

He put up 23 points in 17 regular season games, and had five very important points in Worcester’s first round playoff series win over the East Coast Wizards.

Bankauskas was pleased that he was able to excel and finally show what he could do in a league that was not only new to him, but far more competitive than he anticipated.

“When I got to the NAHL with the Generals, the pace was very fast’” he said.  “Then, I experienced the NCDC with the Boston Advantage. The EHL?, I was surprised at how much talent there was in the EHL. Most of the teams had lots of depth. Everyone could really play, no matter what team we played against. This is quite an accomplishment for the EHL as a league. I was really surprised.”

“Kolye has been a tremendous addition,” said Worcester head coach Sean Bertoni.  “His explosive speed and quickness as well as his ice awareness make him an elite player not only in the Eastern Hockey League but in any league if given the opportunity.  Kolye is a special talent that puts the team first.” 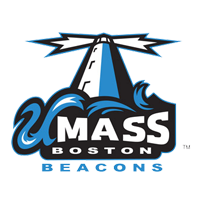 When he arrives at the UMass-Boston campus in Dorchester, Bankauskas will be playing for a head coach in Peter Belisle, who, like Kolye, is from Rhode Island. Belisle’s dad is the legendary Bill Belisle, the record-setting coach at Mt. St. Charles for over 50 years.

“I have trained with coach Belisle in the past,” said Kolye, who played four years of varsity hockey for Coventry HS before heading to juniors. “I know him very well. He’s a Rhode Island guy. I’m a Rhode Island guy. I feel I can really trust him. We come from the same place and I look forward to playing for him.”

Although he has been a member of the Railers organization for just three months, Bankauskas credits the Railers administration and coaching staff for playing a big part in attracting the number of college coaches that showed interest in him.

“Coach Bertoni and Mike Addesa, our Railers GM,  have been extremely helpful,” he said. “They kept me up to date on what colleges they were contacting for me and were talking to day-to-day. They gave me their opinions on what I should look for when I visited schools that I was considering. That process allowed me to concentrate on playing. They really came through for me.”

“They not only saw something in me right from the start but they kept their promise to me and provided me with opportunity for which I will always be grateful,” Bankauskas continued. “GM Mike Addesa while scouting, had seen me play. He has a way at looking at your game like no other. He looked at all facets of my game, and he was able to put together a way to best utilize my strengths and blend them with the team strengths. I think they (Railers staff) knew I had some talents and really believed that I had some potential. I had many more opportunities with the Railers to show what I could do and that restored my confidence.”

As Bankauskas opened up eyes with his play for the Railers, Kolye found that many eyes were upon him and he had numerous college programs that showed interest in him (23 in fact). Because of the way it was established, I really didn’t think about it at the time, but looking back, I really did have a lot of options,” he said. “I can’t understand how his two prior programs could have so badly missed on their assessment of this very special young student hockey player,” Addesa said. “Kolye is a terrific talent within the game of hockey.  He is an outstanding student and he is a tremendous person. He has a maturity beyond his years. He knows exactly the program he wants to take in college (Exercise Science and Physiology) which will lead him to his goal of being a chiropractor one day. His opportunities were many throughout Division 3, Division 2 and Division 1. In my coaching career I have had many outstanding players. Kolye might be the greatest skater with the best take-off and an incredible additional dimension of speed. When you think he is going at high speed, he is able to find another gear. He has great vision, ice awareness and more importantly situation awareness.”