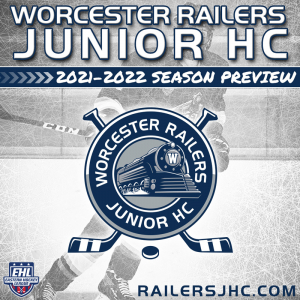 Coming off last year’s shortened Eastern Junior Hockey League season, the Worcester Railers Jr. Hockey Club’s EHL team looks to expand on its success as the squad gets back to a normal schedule in 2021-22.

The Railers went 18-20 last season, making it to the second round of the EHL playoffs where they lost to the Boston Jr. Rangers in the team’s second season.

Worcester opened up its much anticipated third EHL season on Tuesday, September 21, with a solid 7-1 victory over the Maine Eclipse.

“We are entering year three, which is part of an overall five-year plan for our program,” said General Manager Mike Addesa. “We have made a great deal of progress in our first two years. We have worked very hard and had tremendous cooperation from our front office and we have been able to add a number of great coaches to our organization.”

Head coach Sean Bertoni returns to the helm of the Railers for his second year. The organization also welcomes a handful of new coaches. First is veteran coach Jack Lowry.

“He comes from the Vermont Lumberjacks and he will be the new coach of the premier team,” said Addesa. “He was named Coach of the Year in the Premier Division last season and guided his team to the Frozen Finals.”

Next the Railers have added Tim Recio, who will coach skating and skills on a daily basis and will also be the overall coach of all of the defenseman.

“We have also added Keith Aucoin,” said Addesa. “He comes with a great history as he was an all-time leading scorer in the AHL and also played a substantial amount in the NHL. He will be an associate coach with coach Bertoni at the EHL level.”

“Stephen will be our shooting coach and will also work with all our players that will take face-offs during the games,” said Addesa. “Brian we will share with Harvard University and it will be his second year working with our goaltenders. Overall, we are especially grateful to our ownership for a very talented coaching staff to help our boys develop.”

The Railers have a slew of key returners to the team, but will also feature a number of new players that all hope to contribute in a positive way.

“It is a process,” said Railers head coach Sean Bertoni. “The kids are working hard and getting better everyday. They need the time to adjust just like anything else. We like to approach hockey like an academic subject, we want the kids to be the best they can and to learn. We have high expectations for this season and everyone is eager to get going. Kids are very excited and we are happy to start at home.”

Along with coach Bertoni, Addesa was also speaking to how important academics are and that hockey and academics go hand in hand.

“Some of our premier players will still be working on the high school level and members outside of high school will be taking college level courses online,” said Addesa. “That will run parallel to the approach we have of teaching hockey. Our approach will be very academic.”

After only playing a few different teams last season due to the pandemic, the Railers look forward to playing a full schedule and getting back to some sort of normalcy.

“It makes it more exciting for everyone,” said Bertoni. “Last season we really got to know our opponents, which sometimes isn’t a good thing. It will be nice to have some normalcy when we travel, especially the team bonding aspect. We are just excited to play everyone this season.”

In their third year as a program, the Railers have made huge strides from year to year and they are hoping to do the same this season.

“We want the kids to be living out their dreams playing hockey so they can hopefully go on to play college/NCAA hockey and have multiple different options to choose from,” said Bertoni. “They work hard so they can be the best they can and improve each and every game.”

“We have a number of returners that had a great second half last year while being the youngest team,” said Addesa. “We expect our team to be more mature and a team that possesses great speed and quickness.”

The EHL team is only returning two defensemen from last year’s squad. The Railers welcome back Tyler Drummond (Baldwin, NY) and Colin Oppelt (Franklin, MA). Drummond put up 24 points last season. Moving up from the Railers EHLP team is Jake Barcelou, who is hoping to be a key contributor on the blue line this season. Joining the defense this season are Tyler Anastasi (Andover, MA), Julian Etauri (Dollard-Des-Ormeaux, CAN) and Cormac Flaherty (Quincy, MA) all hoping to make a splash.

“Matt (Pimental) will be our captain this season,” said Addesa. “He is one of the finest leaders. He is a complete player and has tremendous character and integrity. He was named first team center iceman in the Central Division of the EHL last season.”

In addition to the returning players, the team will feature a bit of a new look as Worcester has 10 new forwards on the roster.

Returning in net for the Railers is Stefan Kulhanek (Wein, AUT) who is coming off a great 20-21 season in which he played in 25 games and posted a 2.93 GAA. Also, joining Kulhanek in net this season is Cam Milewski (Mission Viejo, CA) and Xavier Lapierre (Cap-Sante, CAN).

Addesa stressed how fortunate the team is to play in such a great facility and how excited they are to get going.

“We are very fortunate to play in a building as beautiful as the Worcester Ice Center,” said Addesa. “Derek Alfama keeps it spotless and makes sure the ice surfaces are always good to go. We are really grateful for Derek and his continuous help for the growth of our program. We are very excited to get off and going and start our season.”