The Worcester Railers Jr. Hockey Club’s EHL team kicked off its 2021-22 season in a big way this past week.

The Railers swept the week taking down the Maine Eclipse 7-1 in their season opener, knocking off the defending champion Boston Jr. Rangers 4-1 in their second game of the week and the New England Wolves 3-2, in a thrilling overtime win on Saturday to start the season 3-0.

Worcester started their season off with a bang in game one getting seven different goal-scorers against the Eclipse where everyone on the team contributed.

After getting down 1-0 in the first, the Railers came back strong scoring four goals to close out the first period. Jake Barcelou (Hyde Park, MA) got the scoring starting and Matt Pimental (East Providence, RI), Mike DiMascolo (Cranston, RI) and Tyler Anastasi (Andover, MA) all followed with goals to put the Railers on top 4-1.

Late in the second period, Jack Lee (Chicago, IL) added another for the Railers to extend the lead to 5-1.

The Railers got two more in the third from Ben McGlashing (Arlington, MA) and Anthony Marchant (Norwood, MA) to make it 7-1 and seal the first victory of the season.

In game two, the Railers were facing-off against the reigning champion Boston Jr. Rangers and came out firing scoring three unanswered goals in the first period to stun the home team.

Worcester wasted no time getting on the board as 17 seconds into the game, Conor Donovan (Nahant, MA) got the scoring started. Damon Dulac (Mascouche, QUE) made it 2-0 minutes later and to close out the first Pimental beat the Rangers defenseman along the boards made a nice pass across to DiMascolo who scored to make it 3-0 after one.

The Rangers got one back a minute into the second period, but that is all they would get as the Railers were able to hold them.

Late in the third period, Charlie Addesa (Andover, MA) added a powerplay goal to make it 4-1 and send the Railers home victorious.

In their final game of the week, the Railers took on the New England Wolves. The Wolves got on board first making it a 1-0 game after one.

The Railers finally tied it 10 minutes into the second on a goal by Cormac Flaherty (Quincy, MA), but with one second remaining in the second period, the Wolves scored regaining their lead.

With five minutes to play in the game, McGlashing scored his second of the season to tie the game at two forcing overtime.

34 seconds into overtime, Anastasi won a defensive zone face-off, brought the puck up and fed Pimental a perfect pass across the crease where the captain buried the shot to give the Railers a thrilling 3-2 win. Cam Milewski (Mission Viejo, CA) finished with 20 saves for Worcester.

This week, the Railers Jr. Hockey Club will host the first EHL Showcase of the season, as all 18 EHL teams will see action at the Worcester Ice Center. They will take on the Walpole Express Thursday 9/30 (11 am faceoff), the New England Wolves Friday 10/1 (12:10 pm) and the East Coast Wizards Sunday 10/3 (10 am start). 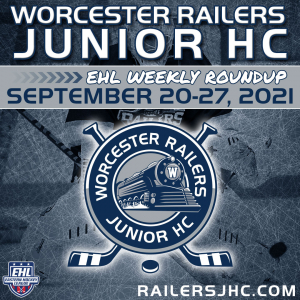