The Railers defeated the New England Wolves 3-2 in a big overtime win Saturday on the road for their first win of the season.

Charles Lavoie (Dolbeau-Mistassini, CAN) got the scoring started for the Railers at 3:51 of the first period with the assist going to Jackson Duquette (Wilbraham, MA) to make it 1-0, but their lead was short-lived as minutes later the Wolves got on the board.

The game remained tied into the second when Worcester took the lead on a goal by Brayson Bennett (Columbus, IN) after two solid passes from Lavoie and Duquette.

Back and forth the game went as early in the third period, the Wolves tied the game again. Neither side could break the tie, so the game headed into overtime where the Railers took care of business.

1:58 into overtime, Matt Pacheco (Belchertown, MA) passed across to Matt Lombardi (Hudson, MA) who was right there to net the winning goal giving the Railers the thrilling 3-2 win.

The Railers will look to continue this success into this week where they will host an EHLP Showcase at the Worcester Ice Center. The Railers will play the New Hampshire Avalanche Thursday 9/30 (3:10 pm), the Seahawks Hockey Club Friday 10/1 (6 pm) and the Vermont Lumberjacks Saturday 10/2 (8 am). 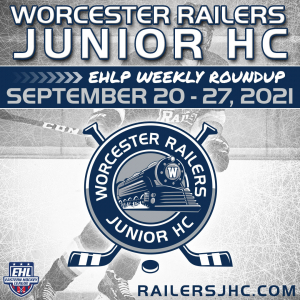