The Worcester Railers Jr. Hockey Club EHL Premier team remained unbeaten on the season after an impressive showing over the weekend.

The Railers hosted the first EHLP Showcase of the weekend at the Worcester Ice Center and won all three games they played.

They started off the Showcase winning 2-1 over the New Hampshire Avalanche in a shootout win on Thursday. Friday they beat the Seahawks Hockey Club 2-0 and sealed the weekend off with a 2-0 shutout win Saturday over the Vermont Lumberjacks in a battle of league heavyweights. 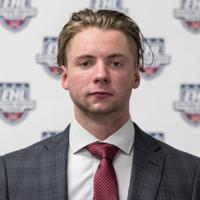 Railers goaltenders Xavier Lapierre (Cap Santé, QUE) and Cam Wickens (Revere, MA) combined to allow just one goal over the three games and have both been huge assets early in the season.

In game one of the Showcase the Railers took the lead at the end of the first half on a power play goal by Max Beaulac (Fitchburg, MA) to take a 1-0 lead.

The Avalanche responded late in the second half to tie the game, sending it to a shootout.

John Belisle (Cumberland, RI) got the game winner for the Railers in the shootout with a nifty shot to give Worcester the overtime win.

In game two, JT Gary (Vienna, VA) got the game’s first goal with the assist to Matt Pacheco (Belchertown, MA) mid-way through the first half.

The Railers held a 1-0 lead into the game’s waning moments,  before Connor McAleer (East Lansing, MI) added an empty net goal to make it 2-0 and send the Railers to their third consecutive win. 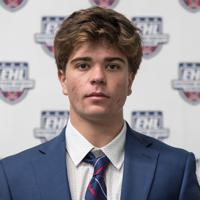 Worcester closed out the EHLP Showcase with a big 2-0 win over the Lumberjacks. At 7:47 of the first half Christopher Lawson (Southern Pines, NC) scored his first of the season to put the Railers up 1-0.

Later in the half Collin Berube (Groton, MA) fired home a goal after passes from Gary and Brayson Bennett (Columbus, IN) to make it 2-0.

That offense is all they would need as they went on to the win the game by that 2-0 score and finish the showcase going a perfect 3-0, allowing just that one goal.

The Railers (4-0) are now the league’s only unbeaten team and will look to continue the winning streak this week when they play the Seahawks Hockey Club at Tony Kent Arena Tuesday afternoon (1:30 pm). 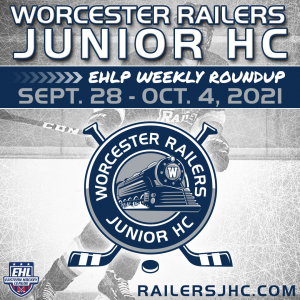 The Railers JHC teams hosted the first showcase of the season for the EHL and EHLP leagues at the Worcester Ice Center.