It was a quiet week for the Worcester Railers Jr. Hockey Club’s EHL team as they won the only game they played.

The Railers took on the Connecticut Chiefs Friday at Newington Arena and won a tight 2-1 game giving Worcester its 13th win of the season.

Down 1-0 heading into the third period, the Railers came through with the two goals needed to comeback and beat the Chiefs.

Connecticut scored two minutes into the game and then from there, both goalies came up big for their teams to hold the game at 1-0 into the third period.

With two minutes remaining in the game Mike DiMascolo (Cranston, RI) gave the Railers the late lead and that is all they would need to complete the comeback win.

Next up, the Railers (13-3-1) will take on the Vermont Lumberjacks Saturday November 20 at 1 pm at Leddy Arena. 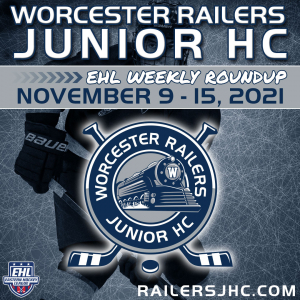 The top-ranked team in the EHL is sending a forward, 3️⃣ defensemen, and their Head Coach, Sean Bertoni, to the 2021 EHL All-Star Classic.#EShow | #PathToCollege pic.twitter.com/3HhVn2l7f9

🚨 @nexlevelhockey Power Rankings 🚨
Hear for yourself how these came about. Episode 97 of the #EShow is out now.#PathToCollege pic.twitter.com/D2hYRzxF2O