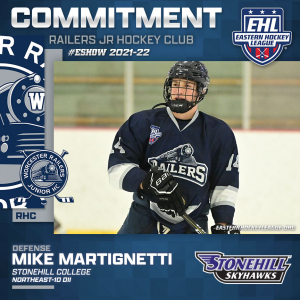 The Worcester Railers Junior Hockey Club has its first college commitment of the 2021-22 season, as defenseman Michael Martignetti has announced he will be going to Stonehill College next year. The Skyhawks are an NCAA Division 2 program playing in the Northeast-10 Conference.

“I met both coach Borges’ (David Borges is the head coach, and brother Darrell is the assistant) at a Showcase and got the chance to tour Stonehill,” Martignetti said. “The campus is amazing; they recently renovated the business school, which is my chosen major. Stonehill has an excellent hockey program and won the most recent NE-10 championship in 2020.”

Martignetti, who starred at Winchester (MA) HS during his high school career, joined the EHL Railers in mid-October and has been a mainstay on the blue line since. In that short period of time, the Railers were instrumental in the defenseman’s college decision.

“Coach Addesa (Mike, Railers GM) and coach Bertoni (Sean, EHL head coach) worked tirelessly to help me find the right match of academics and athletics in the my college experience,” he said. “I was fortunate to have Coach Addesa’s and Coach Bertoni’s knowledge and leadership throughout the process. They spoke directly to many coaches which allowed me to put my energy and focus into playing. They are both very thorough in the recruiting process and truly want the best they can offer for their players.”

“First and foremost, Mike is a tremendous person, a high character guy,” said Bertoni. “Mike has provided our team with excitement and energy. He is a very good skater with tremendous offensive ability. I am very excited for the Martignetti family.”

Prior to his senior year at Winchester, the burly blueliner played a half-season with then the first-year Railers EHLP squad, returning after Thanksgiving to play his senior year at his high school. It was then he first saw the attention to detail that has become a hallmark of the Railers program.

“I will forever be thankful for the opportunity Coach Addesa gave me my senior year. Coach knew how important it was for me to finish my senior year with Winchester,” Martignetti said. “I played for a few months under Coach Bertoni in the EHLP. I experienced first hand how dedicated he is to execute at the highest level every day. His work ethic and commitment to excellence are what drew me back this season.”

Martignetti skated in the USPHL Premier last season, and for the start of this season, before making the key decision to return to the Railers.

“The Railers program is unique in its location, facilities and staff,” he said. “Our off-ice training is led by Charlie Bando who offers an extensive, high-end training program. One of the best things about being a Railer is the full-time care we receive from our trainer Kelli (Meyer). Kelli’s ability to keep us healthy is unmatched, keeping us on the ice and in front of schools. The team culture in Worcester starts on the ice and extends outward. The team always comes first.

“Everyone involved top-to-bottom is a part of a tightly-knit group that resembles a family,” Martignetti continued. The Railers staff, in particular, has played a pivotal role in my life. After I left to play my senior season, I was able to call Coach Addesa many times and ask for advice about leadership and hockey which was crucial to my development. Coach Addesa was calling schools on my behalf while I played for other programs. He has been actively helping me to be recruited since the day I met him.”

With his college decision made, the Railers defenseman can now concentrate on helping the team challenge for an EHL title.

“I am happy to have established by home for next year and be able to put by focus solely on playing, supporting my teammates, and being a part of the winning culture being built in Worcester.”