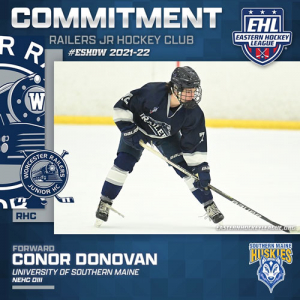 Conor Donovan is the second Worcester Railers Junior Hockey Club’s commitment of the young season, as the feisty forward has announced he will attend the University of Southern Maine starting with the 2022-2023 season.

The Huskies are an NCAA Division 3 program and play in the New England Hockey Conference. The school is located in Gorham, ME.

Donovan had several choices to make for where he would continue his hockey career, but chose USM, which he felt would be the best fit for him.

“I visited the school over the summer and loved the campus,” Donovan said. “Coach (Ed) Harding was fond of me, and I was fond of him. Plus, they have a rink right on campus, which makes for a great atmosphere.”

The Nahant, MA native is a great example of the hockey success story. He played four seasons and had over 100 career points for Swampscott High School, a Division 3 program in Massachusetts High School hockey.

He did catch the eye of both Railers EHL head coach, Sean Bertoni, and team general manager Mike Addesa. After graduating from Swampscott in 2020, Donovan joined the Railers’ EHLP team, and impressed right away. Later on in the season, the Railers’ braintrust elevated Conor to the EHL squad, where he quickly became one of the team’s key players.

“Conor is a great example of hard work and determination,” said coach Bertoni. “Conor started last year with our EHLP team, his work ethic was noticed and he was brought up to our EHL team and became an impact player immediately. He is the ultimate competitor and we are extremely happy he is going to be a student athlete at Southern Maine. He is a great example for all. We are looking forward to have him playing at the next level.”

“I was very happy that coaches Bertoni and Addesa decided to move me up,” said Donovan. “It was a challenge for me at first, different guys, higher intensity practices. I owe a lot to them to have a chance to go to college and become a student athlete.”

Despite his size (5’7” | 150), Donovan is a physical player who won’t take a back seat to anyone on the ice. It is something he has had to deal with his whole career.

“Every shift I have to prove that I belong on the ice,” he said, “that I can be a physical player.” 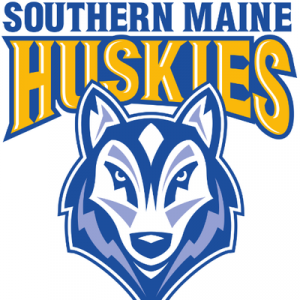 Donovan is very appreciative of the work the Railers organization has done over the past few years to get him in position to continue his career at the college level.

“I am thankful for the whole organization,” he said, ‘that they took a chance on me. They want the best for you, both athletically and academically. Off the ice, they talk to coaches, email coaches and have them meet us after games sometimes.

“Coach Bertoni has a motto: ‘never be satisfied.’ The Railers emphasize that all the time. It really motivates me a lot every day, in workouts and in games. My compete level has really gone up.”

The Railers return from the Thanksgiving break in first place in the Central Division with a 13-3-1 record and Donovan is ready to play a big part in the team’s continued success.