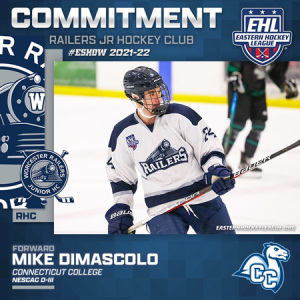 Forward Mike DiMascolo has become the latest member of the Worcester Railers Jr. Hockey Club to announce his plans for next season.

The Cranston, RI native has committed to Connecticut College.

“I’m very excited,” DiMascolo said. “It is a top choice for me. I’m glad I was able to finally seal the deal. Connecticut College is such a great school academically. I’ve been looking at it since I was at St. George’s. I’ve known coach Ward for a long time.”

After starting his scholastic career at Bishop Hendricken HS in Rhode Island, DiMascolo moved on to St. George’s School in the prep ranks, where he scored 51 goals in 84 games over three seasons.

“Our entire organization is ecstatic for Mike and his family on the commitment to Connecticut College,” said Railers head coach Sean Bertoni.  “Mike came to us last year with Connecticut College as his number one choice. Mike is a phenomenal young man, he is one of the most pleasant players I have been around, a genuine person. He has put in the work to achieve his goal. Mike has rare skills and every day I am shocked with his ability. He is a mature kid with a ton of potential. I know he will be a successful student-athlete at Connecticut College. ”

He joined the Railers in December of 2020 and was an immediate contributor, scoring six goals in 12 regular season games, and then two more in four playoff tilts.

“After an unfortunate start to that season, I am happy that I ended up with the Railers,” DiMascolo said. “It was a great spot for me. I did all right.”

The left-shot forward saw right away what the Railers junior program had to offer a player.

“They have been so helpful,” he said. “Coach (Sean) Bertoni advocated for me every day, and Coach A (GM Mike Addesa) was there for me as well. That is the benefit of playing for the Railers, to have these type of resources. They pushed me every day to become a better player.”

Being held accountable every day was a key for DiMascolo. He said being pushed hard every day in practice, and in games, is a big help to players.

DiMascolo also brought up the positive culture in the Railers program.

“Everyone supports everyone. Everyone wants everybody else to do well and get into a college,” he said. “Now, it is my turn to help out others reach their goal.”

The forward has continued to be a key in the offensive success for the Railers. His 14 goals are currently second on the team. He and his Railers teammates are hoping for big things the rest of the way.

“We want to win a championship, that is the goal,” he said. “We have the ability to get it. There is a good opportunity for us. All we need to do is put all the pieces together.”

“When Michael arrived he had been misled and he had totally lost all of his self-confidence. Within our Railers format, each player gains from his teammates, our coaching staff and management tremendous self belief, and a little at a time Michael grew to the necessary height of self-confidence one needs to be able to go to an outstanding academic institution and play at a high level of hockey,” said Railers GM Addesa. “On behalf of the Railers, I couldn’t be happier for Mike and his family of the opportunity he has earned for himself at Connecticut College where he will get to play in the very prestigious NESCAC conference.”