Worcester Railers Junior Hockey Club captain Matt Pimental has made his decision on continuing his academic and hockey career. The forward has announced he will attend Stonehill College this coming fall and play for the Skyhawks. Stonehill is an NCAA Division 3 program that plays in the Northeast 10 Conference. The team is coached by David Borges. The decision happened late in the process, according to Pimental, who is thrilled he will be playing college hockey not too far from his East Providence, RI home. 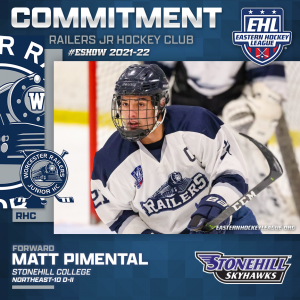 “I received a call from coach Borges inviting me to campus,” Pimental said. “I went on a tour and fell in love with the school. It will be a great fit for me. Coach explained his vision for the program and it was what I wanted to hear. I’m glad everything came together, academically, socially and also the hockey part of it.

“I was down to two schools, the other being in the Midwest. Stonehill being close to my home definitely played a part in my decision. It will be a lot easier for my family and friends to see me play in college.”

Pimental played two seasons of prep school hockey at Williston Northampton before joining the Railers for the 2020-21 season. He has served as a team captain both seasons in Worcester.

“Matt Pimental has been a two year captain for our program,” said Railers head coach Sean Bertoni. “Matt exemplifies what it means to be a leader on and off the ice. Matt’s game has progressed in all areas since joining the Railers. Matt is a complete 200 ft centerman that takes pride in playing at a high level in all three zones. He is a college coach’s dream. We are extremely proud of Matt Pimental.”

Pimental has been one of the Railers top offensive players each of the last two years. In the 20-21 season, he put up 14 goals and 22 assists. So far this season, heading into the Central Division final series against the Connecticut Chiefs, Pimental has compiled 16 goals and 25 assists, including a pair of goals in the opening-round series win over Apple Core.

He feels the Railers have played a huge role in his development and ultimately his ability to continue his hockey career at the collegiate level.

“It starts with coach Addesa (Mike, Railers GM),” he said. “He has done a lot for me. He has been a great advocate for me in the college process. And coach Bertoni, I think he is the hardest worker in the organization. He is always keeping guys up-to-date with what is going on with college coaches. The organization is very fortunate to have them.”

A big factor has been how he has been able to hone his leadership skills, serving as captain of the Railers EHL club.

“The Railers have provided me two years to develop more,” Pimental said. “Having served as captain for two years I have been able to develop my leadership role and become a strong leader, a better leader.”

Another key in his decision to commit to Stonehill is on the academic side. Pimental is planning on studying finance, and is looking forward to attending Stonehill’s new state-of-the-art Meehan School of Business, which opened in 2019. 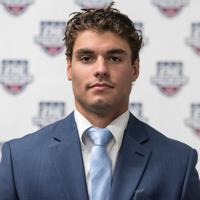 “I have enjoyed witnessing the elevation in the self-confidence of captain MP during his two year within our Railers program,” said GM Mike Addesa.

“We fast became aware of the leadership potential that Matt exhibits in a very humble way in everything that he does and very quickly chose him to be our captain. I have coached many outstanding leaders over a lengthy career. Matt Pimental ranks in the area of character and leadership with the very best that have ever been a part of any team I have coached or managed.. He is very intelligent and a very good student. He has impeccable character. He has obvious athleticism and probably what separates him from the pack…he has that unusual gift of caring much more about the people he believes he is destined to serve than the caring he has for himself.

“Everybody in Matt’s life means so much more to him and he is willing to sacrifice himself in every way to give the best he has within him to each of those people. In his first year, he had been offered a number of options to move on to the collegiate level and, without any pressure from our staff, chose to remain a part of our program for a second year for further development. The number of schools that pursued him over a two-year period totaled 21 and he is deserving of all the interest he has been shown by that tremendous number of schools. He is a young man that has grown up in a very caring family. We are thrilled for his family and for Matt himself that he has had the opportunity to choose from a list of so many outstanding schools. He is as deserving of all of the attention and opportunities presented to him by all of those outstanding institutions. We are deeply indebted for the great service he has provided to all of us in his two years as a Railer.”