Worcester Railers Junior Hockey Club forward Ryan Moorhouse is the latest member of the team to make his college commitment. Moorhouse will be a student athlete this coming fall at Westfield State University.

He knows the school well, as he is a native of Westfield, MA.

“It is kind of a unique situation going to college in the town you grew up in,” said Moorhouse, “especially with my two older brothers having gone there for college as well. Westfield was my number one choice. It was something I always wanted to do. It worked out well.” 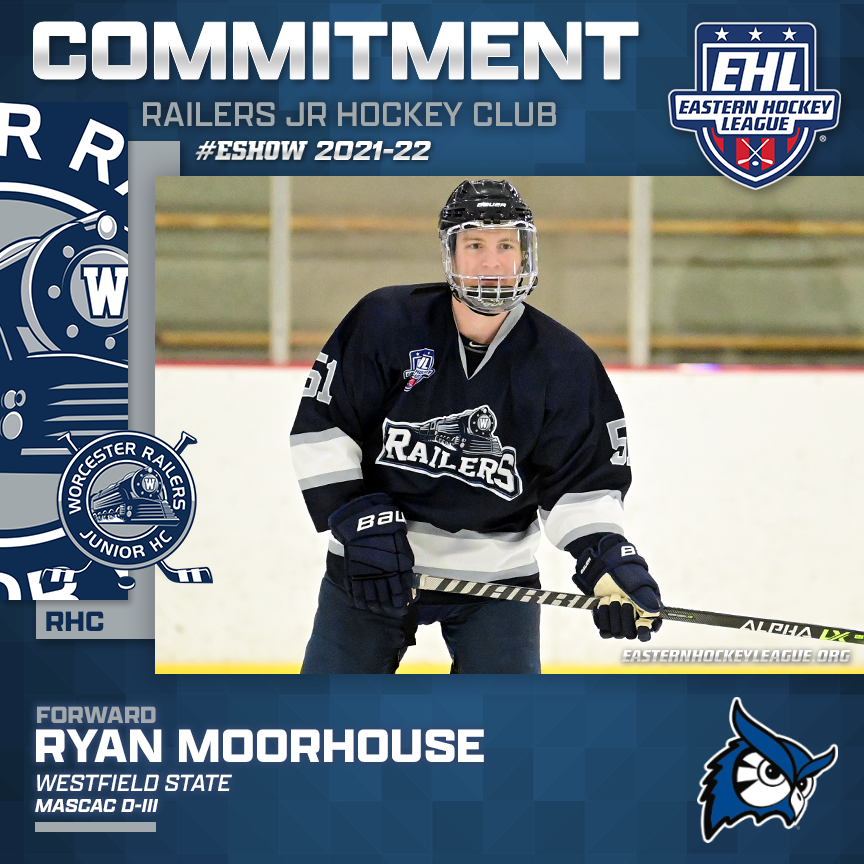 Westfield State is an NCAA Division 3 program playing in the Massachusetts State College Athletic Conference (MASCAC). The Owls are coached by Bob Miele.

Moorhouse is very familiar with the Westfield program. He has attended many games, first when one of his older brothers skated for the Owls, and a handful of games this past year. Earlier this season, coach Miele reached out and invited Ryan to visit.

“I knew what I would be seeing as far as the campus goes, but it is part of the process,” he said. “They showed interest in me. The team is getting better all the time and I know they are bringing in a lot of good players for next year. I was also able to see the team’s new locker room, which was impressive.”

After starring at his hometown Westfield HS, Moorhouse skated for two seasons with the Springfield Pics organization in the USPHL before joining the Railers for this coming season. It has been an enjoyable year. 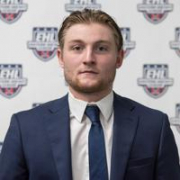 “I am loving it,” he said of his experience with the Railers. “One of the things I wanted to do in this my age-out year was to live away from home. It has been great. The Railers staff and general manager have been great, a lot of help. They really know how to make a good player get better.”

“Ryan Moorhouse is a three-zone player that can play the middle and wing,” said Railers head coach Sean Bertoni. “Ryan has given us an honest effort and is a great teammate. We are happy that Ryan has achieved his goal and playing hockey for coach Miele at Westfield State.”

Moorhouse was quick to mention all the things that the Railers program offers which help their players improve their game, from the extra ice available at Worcester Ice Center in the mornings, to having a full-time trainer, and a strength & conditioning trainer on-site.

“This is my most important season, and I have been able to improve every aspect of my game,” he said. “Coach Bertoni runs a great practice. We run certain systems and colleges like to see that. Not only do we get to learn systems, but we learn how to learn the systems.”

“He was on the phone with me over the course of the season, giving me options,” Moorhouse said. “He never pushed me to go to a school that I didn’t want to go to. He knew Westfield was my top choice from the beginning and he did everything he could to make it work for me.”

“From day one Ryan was a very hard worker with a lot of small details that he needed to learn and anxious to learn and did master. 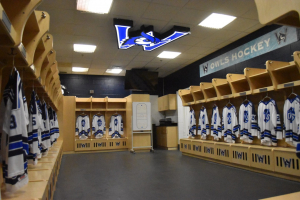 “Ryan came to our program very hungry to develop and with a lot of energy to work very hard,” GM Addesa said. “It became obvious to our staff that there were a number of details in his game he needed to master and with his great attitude, he worked hard to master those small details. He convinced us that not only could he play center, but either wing. He was used as a center iceman, and also as a left wing, and played some at right wing as well. He became a very solid player 5-on-5 and shorthanded.

His goal was not only to develop but hopefully prove that he would be a good enough college player to attract the interest of coach Bob Miele at Westfield State, where he coached Ryan’s other brothers. He was pursued by a couple of other schools but chose to wait with hopes that coach Miele would offer him a spot to be the third brother to play at Westfield State. That day finally came. He was very anxious to commit and accept the offer to Westfield State. Ryan has been a very good teammate.  He has given a great deal of himself to the Railers program and I am very happy that he is able to attend the school of his choice, with the opportunity to play on a team he has longed to play for for a number of years.”