Forward Colin Roe is the latest member of the Worcester Railers Junior Hockey Club to announce his college commitment, as the rugged forward has announced he will attend Westfield State this coming fall.

Westfield State is an NCAA Division 3 program that plays in the Massachusetts Small College Athletic Conference (MASCAC). The head coach is Bob Miele.

Roe, who was recruited by a number of schools, was quick to point out that it was a combination of several factors that drew him to Westfield State to continue his academic and athletic career. 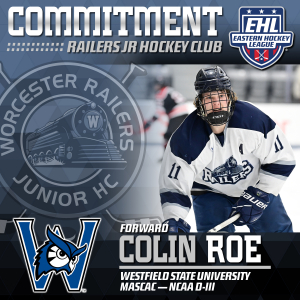 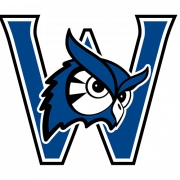 “Honestly, coach Miele and the structure of the Westfield hockey program immediately got my attention,” he said.

“Additionally, Westfield specializes in the college major that I have wanted to pursue for a long time, that being special education. Plus, I know personally a lot of the players who are members of the Westfield hockey team. So, I guess you could say it was a combination of everything. Taking all into consideration, I knew I wanted to be a part of it.”

The Hyde Park, MA native is a true veteran of the Railers, having been with the program since its inception back in the 2019-2020 season. He spent the first season with the EHL Premier squad, and the last two as a key member and captain of the EHL Club. His journey to college hockey is a true testament to the Railers process.

“That first year I was a senior in high school and was on the Premier team. The caliber of play and the detail in coaching were a big and eye-opening experience for me,” said Roe, a 6’1” forward. “I quickly found an excitement and knew that junior hockey was what I really wanted to be a key part of. My first coach was Mike Addesa III and he is a great coach. He had an incredible way of teaching the game and I gained a tremendous amount of knowledge about the game. He was assisted by coach (Sean) Bertoni and I couldn’t have had better coaches who cared so much about each and every one of us as players on that team that year. After having experienced eight opportunities to be called up to play at the EHL level in year one, little did I know that in year two that myself and coach Bertoni would be elevated to the EHL level together. I can’t thank coach Mike Addesa III enough for helping me to build my confidence and a foundation that prepared me to be a successful player at the EHL level.”

In a most fitting conclusion to Roe’s first year as a Railer, he was selected to the first EHLP League All Star team as the number one center iceman.
In Roe’s first year at the EHL level, he continued his play as a center iceman where he played in all situations, 5 on 5, he took key faceoff draws, played on the shorthanded units and he also played on the power play. Colin was a key part of the overall improvement of the Railers progression and helped lead them to the second round of the playoffs before being eliminated by the eventual league champion. 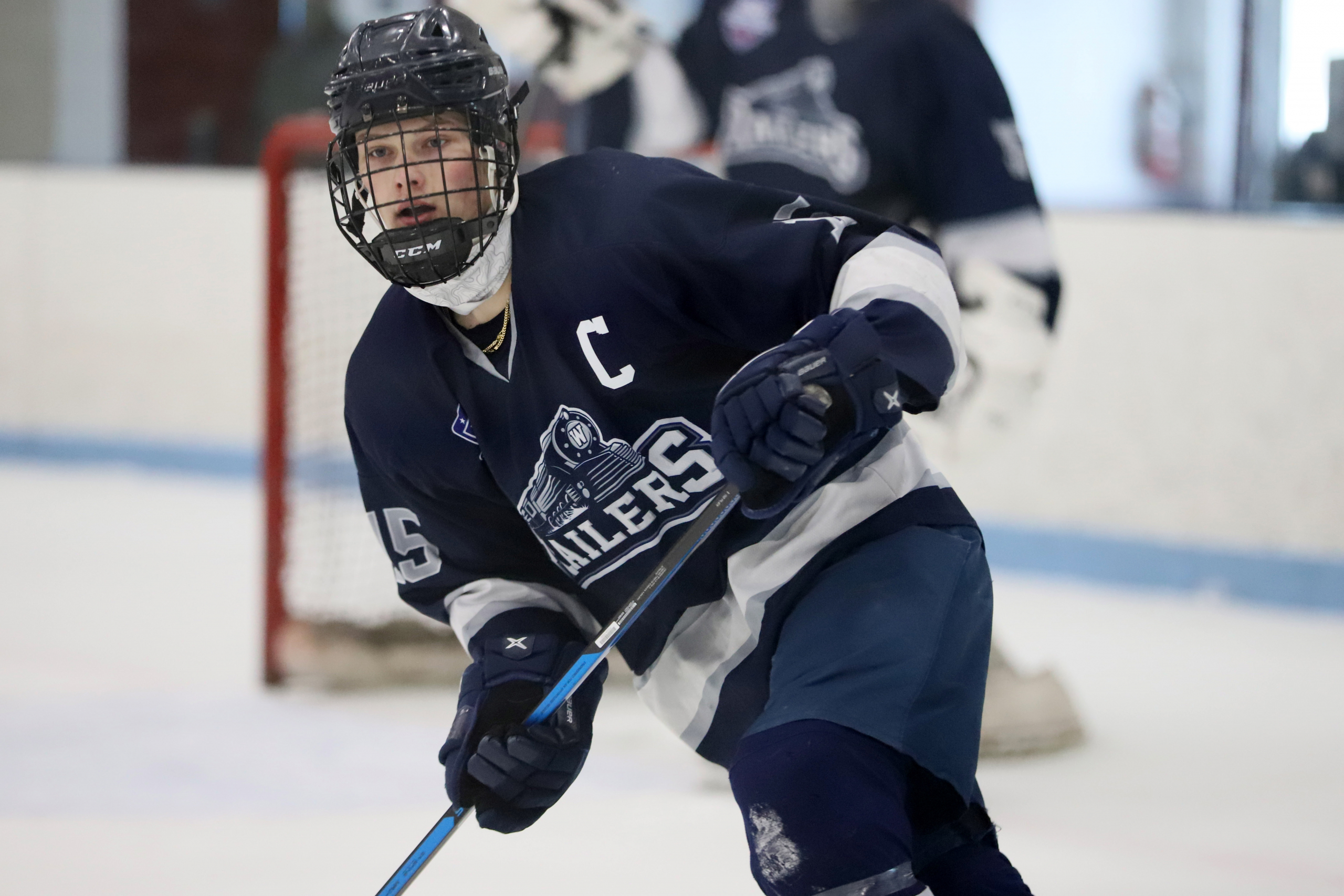 This past season, Roe’s third as a Railer and second as a captain, he fast became a key offensive piece in helping to lead the Railers to the semifinal game of the EHL Frozen Finals at Providence College. After a 20-21 campaign in the EHL where Roe, playing at center, was used as a playmaking distributor, Roe was moved to right wing, a position that seemed to better fit his high energy style of play, where he also fired home 19 goals.

“Our GM (Mike Addesa) played a big part in my move to right wing,” Roe said. “In my first two years I played center and coach Addesa thought I had more to offer our team offensively if I was willing to move to right wing. He and I spent a long time talking about the transition and I worked very hard in the off-season trying to become the best right wing I could be. Our coaching staff had me there in the first few days of training camp and it all clicked for me right away.”

Roe, recently named by the EHL as one of the Top 10 All Time players for the Railers over their first three years of existence, also pointed to the overall structure of the team practices as a key to success for both himself and his teammates.

“Coach Bertoni does a great job with the practices,” he said. “Everything is high-tempo. Even as we transitioned from drill to drill, everything is fast. As a result, we were able to translate that into game situations.”

Looking back, Roe has incredibly fond memories of his Worcester Railers career.

“The experience was top-notch in every way,” he said. “Living in Worcester at The Grid and learning to do my own laundry, learning to shop with my teammates and also learning to cook, all things I was doing for the first time in my life. It was a great group of guys. We had an incredible bond. The Railers organization does everything first class and gives us every opportunity to be successful. All the facilities are great, probably the best in all of junior hockey. We have an exceptional strength and fitness training program. We have three great strength coaches. We have an exceptional athletic trainer and she is available at every game and practice and also available for treatments on the off days. I say it again, the Worcester Ice Center is a top-notch facility. Everything is done to help us get where we want to be as student athletes at the college of our choice. It has been a great all around three years with the Railers program.”

“Colin Roe is a Worcester Railer through and through. He was a three year captain starting with the EHLP and his commitment to his teammates and the program were off the charts,” said Worcester Railers JHC coach Sean Bertoni. “It was great to see a player start with the EHLP and work his way to develop into a very good EHL player and be one of the leaders of the Worcester Railers. Colin is one of the hardest working, toughest players I have ever coached. He will make a fine college player and we are pleased that he will be getting an education and living his dream of playing NCAA hockey at Westfield State.”

“Having coached at the high school level, the junior level and as the head coach at Holy Cross and RPI, and then having worked in a scouting and development role in the NHL, a player of Colin Roe’s type is in very short supply,” said Railers GM Mike Addesa. He plays the game with very high energy. He is willing to play in the highest of traffic areas on the ice at all times. He is willing to be the lead forechecker. He is willing to be the hardest working backchecker. He is willing to play along the wall and throughout my entire career he is one of only three players that I have ever said ‘you hit too much.’ He is a very good skater who plays with a definite physicality and while he is aggressive he plays a very clean game.

“I can only think of one or two other players in my entire lengthy career that have been like Colin, wanting and willing to play with any kind of an injury. His willingness to do whatever it takes to help his teammates every day of every practice and every game. He is willing to give of himself on their behalf. He is an exceptional teammate. Colin has great character and he has been raised by two terrific parents. I am thrilled for Colin that he has found a fit that he is so excited about at Westfield Stare with his tremendous desire to give of himself, with students who have special needs, and that desire fits well to anybody who knows Colin Roe. His desire every day is to give of himself to others before giving to himself. I will be forever grateful to Colin and his family for their dedication and loyalty to our Railer program and I can wish him only the very best moving forward.”