The Worcester Railers Jr. Hockey Club’s EHL team hosted the first EHL Showcase of the season this past weekend at the Worcester Ice Center and they represented well in the process.

The Railers won all three of their games in exciting fashion continuing to improve each time they step out on the ice.

After losing their opening game of the season 4-1 to the Express Hockey Club, Worcester rebounded in a huge way during the showcase.

Worcester kicked off the Showcase Thursday beating the East Coast Wizards, 3-2, in a tight battle. Saturday they took on a red-hot Philadelphia Hockey Club and came out on top with an impressive 4-1 win. They capped off the weekend Sunday night when they took down the New York Apple Core 7-2 where Cam Wickens (Revere, MA) earned his first career EHL win in goal.

The Railers got the scoring started early in the first half against East Coast when Jack Silva (East Bridgewater, MA) scored his first goal of the season.

Later in the first half Jackson Duquette (Wilbraham, MA) scored to make it 2-0 Worcester. The Railers extended their lead to 3-0 in second half when Dan Lemanski (Clinton, MA) scored his first EHL goal.

The Wizards fought back though and made things interesting as Jack Riley scored two goals in 46 seconds in the final minute of regulation to bring the Wizards within one.

Worcester held on, getting some key saves from Stefan Kulhanek (Wien, AUT) throughout for the 3-2 win. Kulhanek finished with 23 saves in net.

The Railers had everything working in game two on Saturday where they opened up the scoring early once again.

Jack Wineman (Birmingham, MI) added a third goal later in the first half to keep the Railers offense moving.

Wineman added his second of the day in the second half to give the Railers a commanding 4-0 lead.

Philadelphia Hockey Club got one back, but that is all they would get as Worcester earned its second Showcase win.

In their third and final game Sunday night against the Apple Core, the Railers put on another offensive show and did something that is not easy to do and that is score all seven of their goals on the power play.

After the Apple Core took a 1-0 lead, Worcester responded with seven unanswered goals to completely take control of the game.

McAleer tied the game at one and shortly after Anthony Marchant (Norwood, MA) gave the Railers a 2-1 lead.

Worcester came out in the second half flying and put five goals quickly on the board. Wineman continued his strong start adding two more goals to give him four on the season. Chase Carney (Lynnfield, MA), Tristan Boyer (Montreal, QUE) and Edouard Souliere (Montreal, QUE) also added goals.

Wickens made 15 saves in net to earn the victory and give the Railers a sweep in the Showcase. 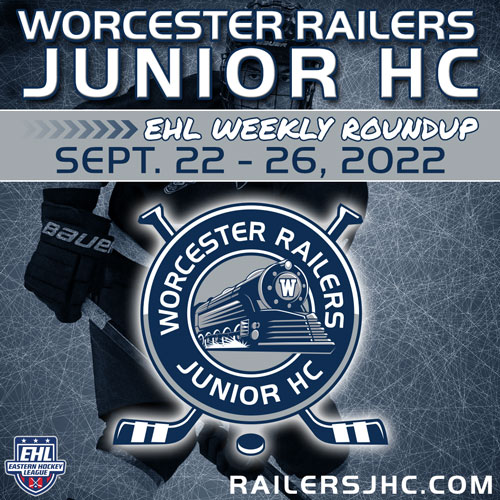