The Worcester Railers Jr. Hockey Club EHL Premier team had an impressive showing over the weekend at the league’s first Showcase.

The Railers hosted the first EHLP Showcase at the Worcester Ice Center and won all three games they played.

They started off the Showcase Friday morning with a 5-1 win over the New Jersey Renegades and continued their strong play Friday night with a 6-0 shutout win against the Philadelphia Little Flyers. Worcester sealed their solid weekend Saturday with over 5-1 win over the Union Jr. Thunder.

After losing their first game of the season 2-1 to the Express Hockey Club, the Railers have now won four straight scoring 21 goals in the process.

Worcester kicked off the Showcase Friday as Ryan Dutcher (Holliston, MA) got the scoring started 30 seconds in. Later on in the first half Max Beaulac (Fitchburg, MA) put the Railers up 2-0.

The Railers extended their lead to 3-0 nine seconds into the second half as Michael O’Malley (Hudson, MA) continued his early season tear with his third goal. A minute later Gavin Bernsten (New York, NY) scored his first goal of the season to make it 4-0.

The Renegades got one back, but the Railers responded right back with a goal from Matthew Loza (Buffalo, NY) to seal the 5-1 win.

Later the same day, the Railers played again and they showed no signs of slowing down as they put up six more goals over the Philadelphia Little Flyers.

O’Malley got his fourth goal 19 seconds into the game to quickly put the Railers on top 1-0. A minute later Jaymin Rolfe (Aurora, CO) scored to make it 2-0.

Later in the first half, the offense continued as O’Malley was at it again, scoring his fifth goal of the season and Rolfe added his second of the game. Jed Morone (River-Edge, NJ) added a goal as did Will Celli (Yardley, PA).

Worcester was right back at it Saturday with their third and final game of the showcase and they continued to impress.

Rolfe put the Railers on top early against the Union Jr. Thunder and Aidan Wicker (Parker, CO) followed that up with his first goal of the season.

The Union Jr. Thunder got one back later in the first half to cut Worcester’s lead to 2-1.

Early in the second half, Michael Holland (Portsmouth, NH) scored to give the Railers a two-goal cushion.

Rolfe and O’Malley continued to dominate offensively as they both added goals late in the second to seal the Railers 5-1.

Worcester (4-1) will look to keep the win streak going when they play the Seahawks Hockey Club Wednesday at the Tony Kent Arena (1 pm). This weekend they will play back-to-back home and home games with the Express Hockey Club. They will be home Saturday (2:50 pm) and away at Rodman Arena Sunday (10:30 am). 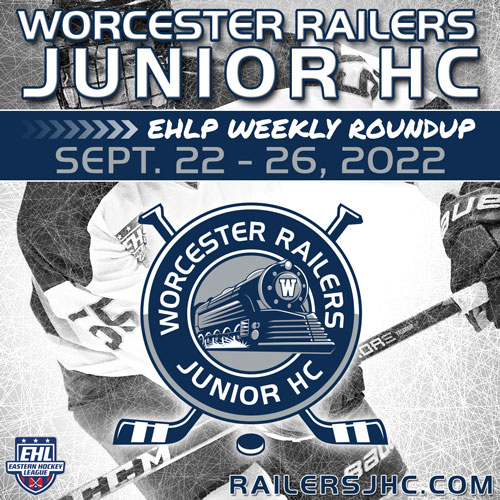