The first Worcester Railers Junior Hockey Club commitment of the 2022-2023 season belongs to forward Dan Lemanski. Following over a year of conversations and a desire to remain close to home, Lemanski has announced he will be attending Assumption University beginning in the Fall of 2023, an NCAA Division II school participating in the Northeast-10 Conference.

“Growing up 15 minutes from Worcester, it was always in the back of my mind,” the Clinton, Massachusetts native said. “After touring last year and seeing the campus, the feel was like home.”

While Lemanski was playing 18U with the Boston Jr. Bruins last winter, he appeared on Assumption’s radar. Their coaching staff expressed a year in juniors would be beneficial to his development. 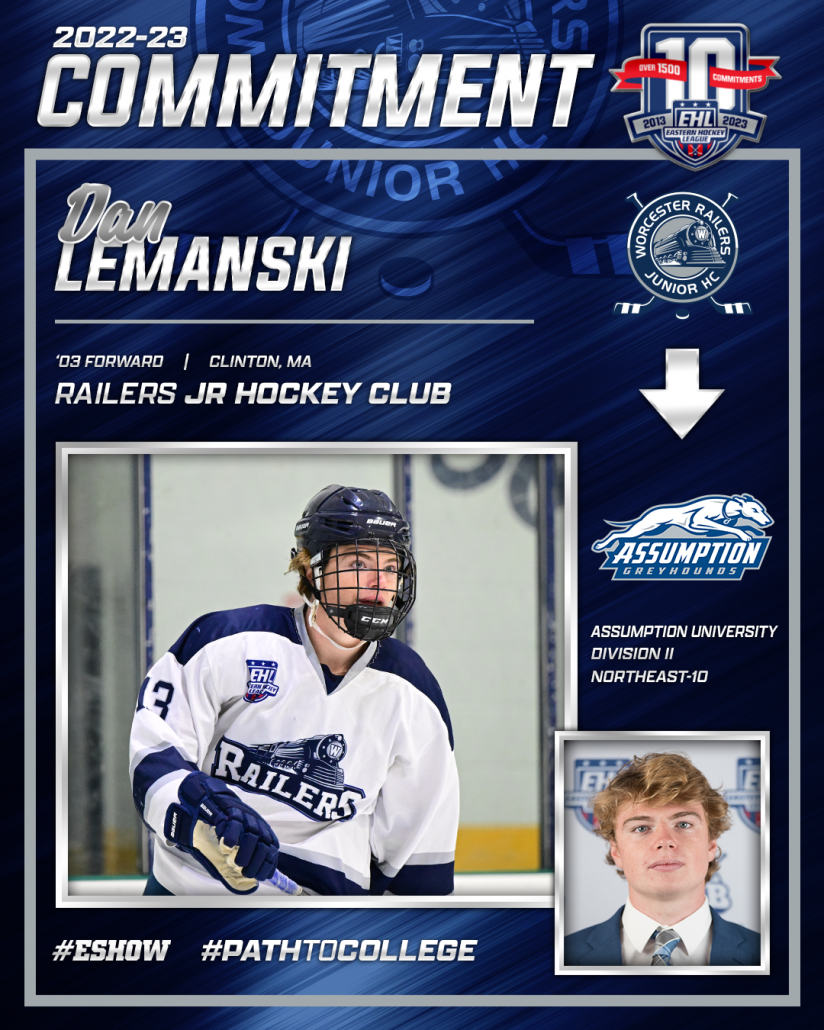 Assumption assistant coaches Dante Tomassini and Brendon Philippon were frequent attendees of Lemanski’s games, especially this year with the Railers. As his game developed at the junior level, he was told he had a spot on the team.

“I sat down with [EHLP Head Coach and EHL Assistant Coach] coach [John] Fine-Lease, who attended Assumption. He answered all my questions and was honest. He told me that if I could see myself going there to do it.”

“I’m happy to see Danny make his commitment to Assumption University,”  Fine-Lease said. “His strong work ethic and high compete level will fit well within the culture Assumption has built.”

Above all, Lemanski feels relieved. “It’s stressful not knowing where you’re going,” Lemanski explains. “I’ve been playing this sport for 14 years and you always wonder what’s next. Now, I know I have a good spot and a home.”

With several months of junior hockey to go, the Railers forward doesn’t think the weight off his shoulders will change anything.

“My love for the games is what makes me work hard no matter what,” said Lemanski, who has played in all 21 games for the Railers this season with two goals and seven assists.  “But now, I’m focused on winning and seeing other guys commit.”

Lemanski credits the Railers, and named coach Bertoni specifically, in altering his perspective on the game.

“The player I am now compared to last year is night and day. I’ve never played at this high of a level before, and I’ve never focused on the details so much. Whether it’s the strength program, the resources, the time coach Bertoni spends with us, the ‘Railer way’ is the right way. I talk to players on other teams and no one focuses on the game the way we do.”

Bertoni is excited for Lemanski’s future.

“Dan is a great teammate who brings a positive personality to the locker room. He is learning to become a complete, three zone player,” Bertoni said. “He works hard and has had his sights on attending Assumption since day one. We are very pleased Dan reached his goal of attending Assumption University to receive an excellent education and to play for coach Looney.”

Lemanski looks forward to finishing a strong season of juniors before moving onto the next level.

“I know what it takes and it’s tough,” he said.  “But it is important to still have fun because these are some of the best memories in life.”

Prior to the Railers, Lemanski attended nearby Clinton High School, playing on a co-op team with Nashoba Regional High. Much of his youth hockey was also spent with the Minutemen Flames.

With his commitment now behind him, Lemanski looks back at his career thus far.

“I played 12 years with the Flames. Seeing guys commit now, it’s so cool knowing we wouldn’t be here without each other. I’m looking forward to the culture of college hockey and making more memories.”